Scott Weiland’s been fired from Stone Temple Pilots — or has he? As word spread that the band has “officially terminated” the singer, he’s speaking out to share his take on the story. 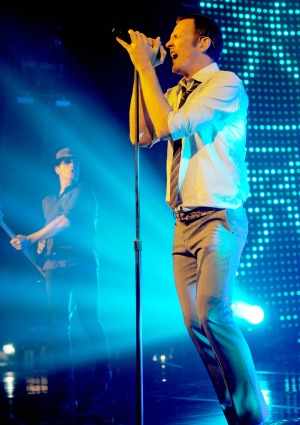 Scott Weiland was fired from the Stone Temple Pilots on Wednesday in a single-sentence statement issued by the band’s publicist. It was the first time the singer had heard of the drama, though, and you’d better believe he had a thing or two to say in response!

Funny, because just one day earlier, Scott Weiland had denied there was trouble within the band, telling Rolling Stone, “STP has not broken up. I haven’t quit. I haven’t been fired.”

“There were some hurt egos,” he admitted, noting the band has been through rocky periods. “But that’s the way it is. No one has ever fired anybody in STP. We’re like a family. It’s also a partnership. I started the band. We’ve always kept things going. We’ve taken time off before. They’ve done their own projects and I fully support that. No one has been fired and I haven’t quit. That’s all hearsay.”

In reaction to Wednesday’s very public firing, the 45-year-old pointed out, “I learned of my supposed ‘termination’ from Stone Temple Pilots this morning by reading about it in the press. Not sure how I can be ‘terminated’ from a band that I founded, fronted and co-wrote many of its biggest hits, but that’s something for the lawyers to figure out.”

Indeed, the band has seen plenty of success over the years. The band’s 1992 debut album, Core, was certified at 8x platinum. In 1994, “Plush” picked up a Grammy Award, while “Down,” “Between the Lines” and “Trippin’ on a Hole in a Paper Heart” have also been nominated.

TMZ reports Scott Weiland went on to say that while his lawyers get to work sorting things out, he’s “looking forward to seeing all of my fans on my solo tour which starts this Friday.”

Do you consider Scott Weiland fired or still a part of STP?