With reports that she may have a role in the Disney Star Wars sequels, interest in the actress hasn’t been this high in years. Unfortunately, it also means people noticed her strange cruise ship stage turn. 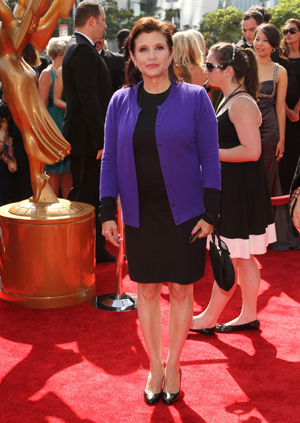 Carrie Fisher has been hospitalized after a flare-up of her bipolar disorder, her representative told TMZ, following reports that the actress gave a very strange performance onboard a cruise ship.

Somebody was there with a camera: Video shows Fisher warbling an off-key a cappella version of the classic song “Skylark,” covered by George Benson, Linda Ronstadt and Ray Charles. Let’s just say that Carrie Fisher’s version probably will not be among its classic covers, especially considering that Fisher’s French bulldog, Gary, appears to do his business onstage while she’s singing.

Fisher swiftly cleans it up with a blue-and-white medical “chuck” pad which she then stashes behind a sofa cushion onstage while the audience gasps and laughs.

“Where am I going to put it?” Fisher asks defensively.

Question: Why did she have a chuck pad ready? Hmm, there’s really nowhere to walk a dog, exactly, on a cruise ship. Maybe that’s just what you do with dogs.

Upon audience request, Fisher then slips into a very nice version of “Bridge Over Troubled Water.” Fisher was married to Paul Simon (who wrote the song) for a year in the ’80s — do you suppose she was thinking about him while she was singing?

The star has been very public about her bipolar disorder and chronic depression, for which she has undergone electroshock therapy.

Get better, Carrie Fisher! We want to see you sporting a white robe in the next Star Wars. Singing!