Tina Fey and Amy Poehler were so charmingly adorable at the Golden Globes that Fey fans hoped she might consider a turn at the Academy Awards podium. Nope, she says, dashing those hopes. 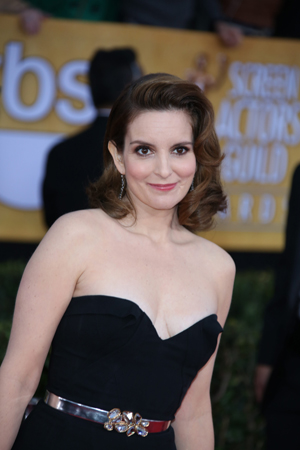 After news broke that this year’s Academy Awards host Seth MacFarlane wouldn’t take on the job again, speculation turned to Tina Fey, whose winning tenure at the Golden Globes with Amy Poehler gave the Globes its highest ratings in six years.

But despite being at somewhat loose ends after the end of 30 Rock, she’s not up for it.

“I just feel like that gig is so hard,” she told the Huffington Post. “Especially for, like, a woman. The amount of months that would be spent trying on dresses alone… no way.”

Any chance at all? One chance in a million?

“I wish I could tell you there was,” she said.

MacFarlane, who garnered mixed reviews for his hosting stint (and accusation from misogynism for the cheerful song “We Saw Your Boobs”), has already said there’s no way he’d host the Oscars again, though it was “fun to have done it.”

He also tweeted on Tuesday that “The Oscars is basically the Kobayashi Maru test.”

Which means? It’s a Star Trek reference. Viewers find out in the opening scenes of 1982 film Star Trek II: The Wrath of Khan that the Kobayashi Maru test is one that forces test takers into one of two possible terrible outcomes. In other words, no one can win.

William Shatner seemingly counts himself amongst the many who would love Fey to do time at the Oscars podium: In an amusing time travel bit in Sunday’s telecast, Shatner pleads from the future for Fey and Poehler to host.

MacFarlane also told CNN that Poehler and Fey are critic-proof: “If I had one review for anything in my career as good as their worst review, for that I would be a happy man,” he said. “I thought they were fantastic, but they are also beloved by the press … there are certain people who have a carte blanche. You’re awesome, we love you no matter what you do.”

MacFarlane also called the Oscars a tough and “thin-skinned room.”

Poehler hasn’t publicly commented yet on the speculation. So there’s still hope there!