A major sacrifice is made to save Bombshell, and it will change everything. 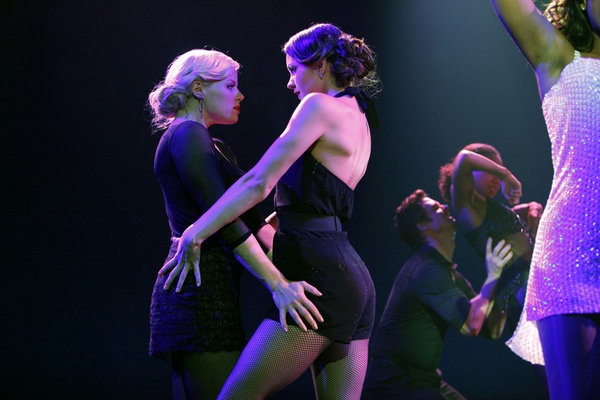 The sexual tension is heating up between Julia (Debra Messing) and Peter (sexy Daniel Sunjata) and that’s no surprise. He’s gorgeous, talented and keeps putting in her place, and she’s brilliant and beautiful so it’s only a matter of time before these two seal the deal. However, their little courtship is filled with some bumpy roads.

Peter invites Julia to his NYU acting class where she discovers that he’s changed all the characters’ names in her play and given it to his class to perform. The students then tell her what they think is wrong with it. Julia throws a hissy fit and can’t accept their “constructive” criticism. You have to wonder how she made it this far in a cutthroat business with such thin skin!

This all leads to Julia and Peter having a few glasses of wine and making some breakthroughs with the play. Julia realizes that all the scenes need to be written from a male perspective. I’m not sure why this is a new idea. Isn’t that what they’ve been getting at for a few weeks now? Either way, it was a big moment for her and then Peter invited her to his home outside the city to finish “revamping the play.” So, that’s what the kids are calling it these days.

Backstage with the hottest musical, Smash! >>

Julia probably would have said yes except that she received an urgent call from Eileen. Turns out Bombshell got funding and is on its way to Broadway! The bad news is Eileen had to forfeit her role as producer and hand it over to her wicked ex-husband, Jerry. Jerry made a phone call to Ellis where he said now everyone will know that Eileen couldn’t do it on her own. You could almost hear the maniacal villain laughing in his head. Then he wrote Ellis a check and told him never to contact him again. Oh, and Nick came back for a minute.

How to stay in Smash-ing shape >>

Then there’s the show that Derek (Jack Davenport) is directing for Veronica (the inspiring Jennifer Hudson). It had its ups and downs, and was filled with Derek-hating moments, but at the end the show came together beautifully. Veronica got to be a tad bit sexy, but nothing too controversial. The best part is that she chose to sing one of Jimmy and Kyle’s songs! Victory for the talented underdogs!

One last thing you should know: Jimmy kissed Karen (Katharine McPhee). He was super-high, but she seemed into it and told him to try again when he was sober. At least he’s not Dev. Anyone’s better than Dev.