T-Swift has been spotted gallivanting around London Town with a new guy, Tom Odell. 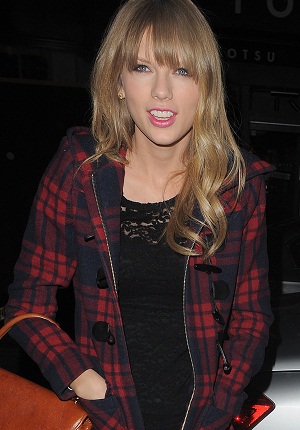 Oh, Tay. You know what we admire about her? She never gives up. After all the heartbreaks and public breakups, she keeps trudging along… bound and determined to find her so-called “prince.” Her newest possible conquest? The budding English singer-songwriter, Tom Odell.

The two have been caught chatting each other up on numerous occasions. Most recently, they were seen inside a local pub and then spotted leaving Groucho Club, a new London hot spot. Before that, they met up at the Brit Awards, where Swift performed “I Knew You Were Trouble” and Odell took home a Critics’ Choice award.

That wasn’t their first encounter, though. They’ve tweeted back and forth as well.

If imitation is the sincerest form of flattery, Tom has had Taylor in the bag since January, when he covered a slowed-down version of her single, “Trouble” at the BBC Radio 1 Live Lounge. It’s a cool and unique version, too. He took her pop-y, upbeat breakup song and turned it into a slow-burning, Radiohead-esque song of torment. Check it out…

Pretty awesome, right? Taylor thought so! When she heard the performance, she gushingly tweeted, “So I was already a [Tom Odell] superfan. Now I’m just floored. This is so good.”

When a reporter mentioned that the tweet may have been Taylor’s way of flirting with Tom, the singer didn’t seem to mind and even shelled out a few more compliments for the “pretty girl.”

Of course, we believe it’s entirely possible that the two are just friends. (Guys and girls can totally have platonic relationships, right?) However, with Taylor’s serial dating track record, we’re thinking (and hoping) this is probably leading up to something more. Would that be so bad? It certainly wouldn’t hurt Tom’s career and maybe this time around things will actually work out for Taylor!