Mona meant it when she said one of Spencer’s loved ones was going to end up dead, but was she talking about Toby? 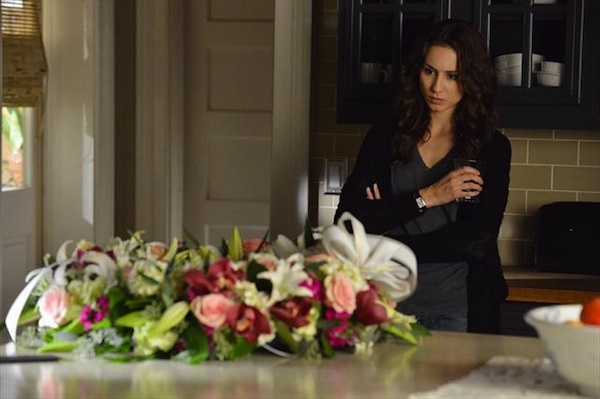 It finally happened. Spencer (Troian Bellisario) finally told the girls that Toby has been working with “A” and the consequences were worst than expected. At first, it caused some trouble between Spencer and Emily (Shay Mitchell) because Emily refused to believe her close friend would lie to her or want to hurt her. But, isn’t that exactly what Mona (Janel Parrish) did to Hannah?

Then “A” sent Spencer an elaborate bouquet of flowers with a threatening note that she was going to follow through on her promise to hurt someone close to Spencer if she spoke out about Toby. How did she know though?! Does she have every single inch of Rosewood bugged with spy cams and recording devices? Or maybe it was because Emily stupidly left Toby an urgent voicemail?

Spencer thinks “A” will target one of her best friends, specifically Emily, so she follows Mona around for the day. What she finds is far worse than she expected. Mona leads her to the woods where she finds the body of a motorcyclist with the helmet still on, but he has the same tattoos as Toby. Then “A” runs past and yells out, “Toby’s dead.” Now, Spencer never lifted the helmet, so it could all be a hoax. I have the feeling that the ghost of Toby will be haunting these girls for a while.

Pretty Little Liars are “Dead to Me” >>

This is Spencer’s last straw and she finally cracks. She’s found wandering in the woods, crying and unable to speak, so the police pick her up and take her to the psych ward. Is she going to become the next Mona?

In other news, someone dropped off Detective Wilden’s police car in Hannah’s (Ashley Benson)  garage where she saw the video of her mother running him over. So, she enlisted the help of Aria (singer Lucy Hale)  and together they pushed the cop car into the lake. These girls do love to make bad decisions.

Lucy Hale had an eating disorder? >>

Also, Maggie and her son have relocated to Rosewood after she was kicked out of her house and Aria is super uncomfortable with everything. She doesn’t feel ready to be a parent and doesn’t seem all that interested in Ezra being one either. She finally tells her mother what’s been going on and the only advice she receives is that sometimes love isn’t meant to last forever. It’s totally fine if Aria doesn’t want to continue the relationship. Will this finally be the end of Ezra and Aria?