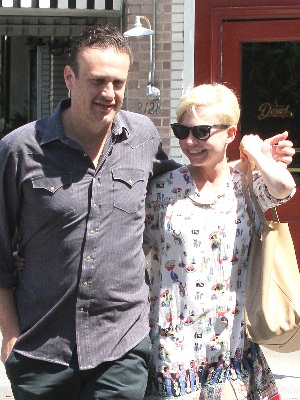 The couple we almost forgot even existed has called it off.

Oz The Great and Powerful star Michelle Williams and How I Met Your Mother‘s Jason Segel have decided to part ways, a source has told Us Weekly.

According to the source, the distance was just too much to deal with for the couple. Segel resides in Los Angeles (most of the time anyway),  where he films How I Met Your Mother, whose final season will begin in the fall. Meanwhile, Williams has lived in New York since before (her late husband) Heath Ledger’s death in 2008.

Remember that time we found out they were together? >>

It’s pretty unexpected. Earlier this year, the couple were seen happily vacationing in Cancun, Mexico, with Williams’ best buddy Busy Philipps. In October 2012, we even reported that the two actors had moved into an apartment in Brooklyn together and that Segel was commuting back and forth. Plus, a source recently even told Us Weekly that Segel had bonded with Williams’ daughter (with Ledger), Matilda.

Sadly, none of that was enough to keep the two together forever. So what’s next for the stars?

We can’t comment on their love lives, but we know their work schedules will keep them busy. Michelle is promoting her latest movie, Oz The Great and Powerful, in which she plays Glinda the Good Witch alongside James Franco (as Oz) and Mila Kunis (as Theodora). Meanwhile, along with starring in a nearly constant stream of comedies, Segel is in the midst of finishing his final run as Lily’s husband, Marshall, on How I Met Your Mother. Currently in its eighth season, HIMYM will end next year after finally unveiling the ever mysterious “mother.”

Maybe once Segel isn’t so tied to Los Angeles, the two will be able to reunite and try again. If anyone deserves to be happy, it’s Michelle and Matilda.