After taking some time off to heal from her fall and the chicken pox, Barbara Walters announces her big return to The View. 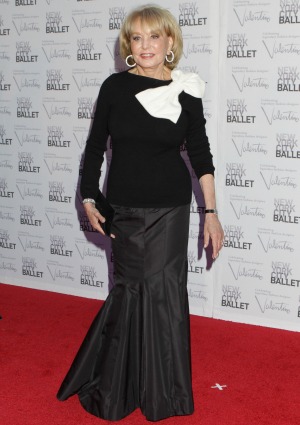 Barbara Walters did not have a good start to the year. First, The View host fainted and received stitches while visiting the British Ambassador’s house during the inauguration weekend.

Her fall caused her to be hospitalized and placed under observation. It turns out the legendary journalist had the chicken pox. Whoopi Goldberg broke it down for viewers in late January.

She said, “We want to give you an update on Barbara. You all know that she fell and cut her head 10 days ago, and then was running a temperature, but it turns out it is all the result of a delayed childhood. Barbara has the chicken pox. She’d never had it as a child. So now she’s been told to rest, she’s not allowed any visitors. And we’re telling you, Barbara, no scratching.”

Now that the 83-year-old has had a chance to rest, she gave her return date during an on air call on Tuesday.

The ABC veteran told her co-hosts, “Like it or not, I’m coming back on the show again. No more chicken pox… I haven’t been contagious for a while, but they wanted me to have rest, and I’ve had enough rest and I’m ready to come back.”

The official date of her return is March 4 and it sounds like she is eager to return.

She said, “I’m so glad to be talking to you… I really miss you.”

Viewers will also be glad to see Walters’ return to the Hot Topics roundtable since she’s the voice of reason when there is a disagreement amongst the panel.

Walters to Christie: You’re too fat to be president >>

There is no doubt Walters will be teased about about her “childhood” illness, but chicken pox must be dealt with seriously when an adult is diagnosed. There is a vaccine for chicken pox that was introduced in 1995, but there is no word if Walters ever considered getting vaccinated.

Walters has been with ABC News since 1976 and she has been on air with The View as a host and executive producer since 1997.

We can’t wait to see you back, Barbara!