Desperately seeking a filler to take the spot Downton Abbey left in your heart? HBO has just the thing: Try Parade’s End. 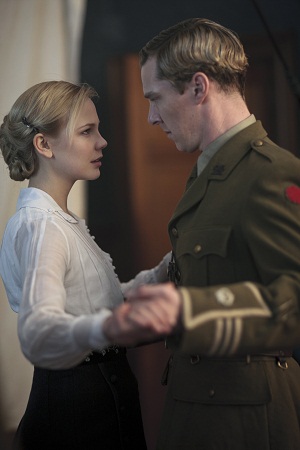 HBO’s Parade’s End is only a three-part miniseries, but it’s got enough drama to last an entire season. Be forewarned, though: Very little remains in the ways of similarities to Downton Abbey aside from the Edwardian setting. Even with all the birth-related deaths on Downton, the PBS drama seems to take a light-hearted dip into the era while Parade’s End dives straight into the mess of it all. It’s a little darker, but equally good. Just be prepared to give it time to grow on you.

You didn’t miss Downton‘s finale, did you? >>

Parade’s End follows the lives of buttoned-up and straight-laced Christopher Tietjens (Benedict Cumberbatch, from BBC’s Sherlock) and the carefree Sylvia (Rebecca Hall) after they meet on a train. Christopher, a stoic blue blood falls victim to Sylvia’s wild side almost immediately after meeting her. The two soon fall victim to their passion by way of an in-train tryst. When Sylvia becomes pregnant, Christopher marries her — much to the chagrin of his uptight but well-meaning friends.

From there we follow the story as the couple goes from lusty strangers to newlyweds and then to a bored couple. While Sylvia seeks excitement by flirting with new men, Christopher looks on, seemingly unmoved. His wedded martyr act only hurts Sylvia more when Christopher doesn’t fly off into a jealous rage.

If his wife’s supposed infidelity won’t shake Christopher from his aristocratic daze, what will? How about another girl and a bleak and terrible war? The miniseries spends time in both the bedroom and the battlefield — and, honestly, both instances will sometimes leave viewers wanting a gun… or a warm body for distraction. If you stick through Parade’s End, though, you might just find a more realistic look at the turning of the century and changing of the times. It’s not always as pretty and optimistic as Downton, but it’s real none-the-less.