What a difference a day makes! Jennifer Lawrence has gone from blonde to brunette just one day after her big Oscar win. 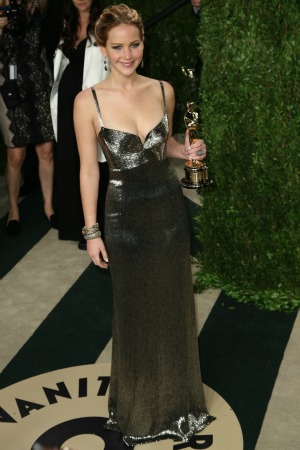 On Monday, the Oscar-winning Best Actress for Silver Linings Playbook went from blonde to brunette. Her hair was done on Monday at the Rossano Ferretti Salon in Beverly Hills in anticipation for reshoots of The Hunger Games sequel Catching Fire.

TooFab.com reported that the 22-year-old was very sweet to the staff even though she had a long night of parties post-Oscars. Her dark Katniss Everdeen look is dramatically different from the soft appearance we saw at the Oscars on Sunday night.

Lawrence was dress in Dior Haute Couture and despite a fall on her way to the stage to collect her statuette, she was a vision of grace and beauty all evening long.

However, Lawrence isn’t the only one dyeing her hair for a movie role.

Actress Shailene Woodley has gone from brunette to red for her role as Mary Jane Watson in The Amazing Spiderman 2.

As the love interest of Peter Parker, she’s following in the footsteps of Kirsten Dunst, who played the same role in the original films starring Tobey Maguire as the title character. This time around it’s Andrew Garfield spinning his web.

Audiences can expect to see the brunette Lawrence in The Hunger Games: Catching Fire on the big screen Nov. 22, while The Amazing Spiderman 2 won’t premiere until 2014.