As if Demi’s heart-wrenching music wasn’t successful enough, she releases a single and gets compared to Kelly Clarkson. 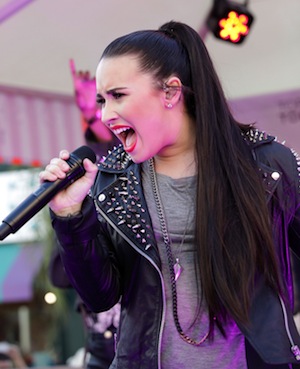 Following the success of “Give Your Heart A Break,” Demi Lovato is back with “Heart Attack.” She may have ridden the coattails of the predecessor in song style, but her delivery redeems it from being a sequel.

The song starts off like a sweet standard pop track (’90s teens: think Samantha Mumba or classic Jessica Simpson), and induces a bit of disappointment at first. All of a sudden, the chorus drops and Demi belts out a vehement, supernatural wail that leaves you sputtering in awe. Any doubts about this being a hit are eradicated.

Demi has doubts over The X Factor >>

It doesn’t have the consistent charm of “Give Your Heart a Break,” but it’s a decent follow-up (that redeeming chorus is something spectacular).

There comes a moment in every former Disney artist’s career where people gauge whether you truly have long-term potential as a musician. You can only hold on to your Disney fan base for so long.

Well, dear Demi, you have officially transitioned into the big leagues.

All bow down to Madame Lovato

What other recent achievement does Ms. Lovato have beyond being a seasoned judge from The X Factor? According to Music and Lyrics, “In less than 24 hours, [Heart Attack] reached #1 on iTunes in nine different countries.”

Billboard made a bold comparison: “Lovato’s transformation from brand-affiliated pop talent to a commanding vocal presence is reminiscent of Kelly Clarkson‘s breakout on Breakaway“.

Kelly is set to breakout as a bride pretty soon >>

Producers The Suspex must ironically be commended for the chorus’s sneak-attack/reveal of Demi’s vocal range — since the song starts off so unsuspecting, you’ve already set your expectations low. Several writers helped pen the song: Mitch Allan, Jason Evigan, Sean Douglas, Nikki Williams, Aaron Phillips and Demi Lovato. The only misgiving I have is that lyrically this song doesn’t compare to her other hits.

Here’s hoping Demi doesn’t pop a Bayer, and keeps giving us all the heart she puts into these songs!

Need some music suggestions? Check out our other music reviews: