Charlize Theron was decked out in Christian Dior at the Academy Awards but she didn’t think twice about her dress when a security guard needed help. 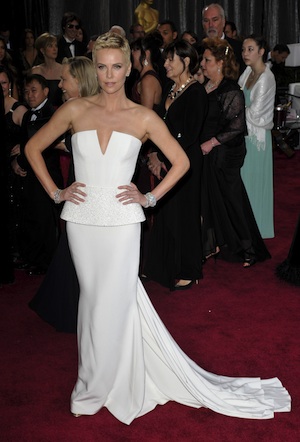 Charlize Theron didn’t think twice about her Christian Dior Oscars dress when a security guard fell to ground and began suffering a seizure at the 2013 Academy Awards. According to a report from E! News, Charlize rushed to the man’s side while another person called medical personnel to the scene.

E! News says Theron was one of the few people around when the security guard fell to the ground and suffered a seizure. Charlize didn’t hesitate to show compassion and grace as she helped the man back onto his feet after his medical ordeal.

Charlize Theron then entered the Dolby Theatre just in time for her opening act of the Oscars — a beautiful dance number with Hollywood hunk Channing Tatum. The graceful A-lister stunned the audience with her excellent performance. “[It was] completely nerve-wracking, but how could I not dance with Channing Tatum? He’s so wonderful.” Theron continued, “I was sort of tricked into it. I thought it was going to be something smaller, like [Seth MacFarlane] pulls me up from the audience and we do a little spin. But then he was like, ‘Rehearsals start Monday!”

Charlize told the New York Times in 2008 she always envisioned herself as a dancer rather than an actress. “I always wanted to dance,” said Theron. “I always thought of myself as a dancer… At 16, I won a modeling contest and moved to Milan. Even though I was modeling, I always saw myself as a dancer. I had the capability to be a bigger model than I was. They were always telling me, ‘Lose five pounds and you’ll be a supermodel.’ But I saw modeling like waitressing — it was a way to pay for another career, and that career was dance.”

If Charlize began Oscar night helping to save a man’s life, she ended with the same elegance at one of the after-show parties. OMGYahoo! reports at The Lot in West Hollywood several partygoers stepped on the train of Theron’s dress. Did the trampled Dior gown irk Theron? Not a bit! A source says Charlize simply smiled and said, “Don’t worry, everyone does it.”