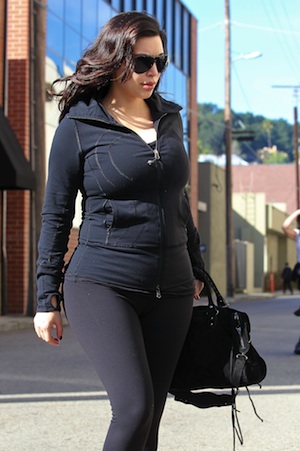 Worried about losing your daily dose of Kim Kardashian and Kanye West? Despite what the couple says, the two don’t seem to be fading from the spotlight anytime soon.

A judgmental Kim Kardashian eats her words about marriage >>

It should be noted the L’Officiel Hommes tends to be provocative — at least by American standards — on several covers. Yet to be fair, the story isn’t that Kardashian and West are posing for such a racy photograph and Kim gets naked. Not surprised. The issue is that Kimye continually mention in interviews how much they value their private lives.

Kardashian told DuJour magazine last week, “My boyfriend has taught me a lot about privacy.” She continued, “I’m ready to be a little less open about some things, like my relationships. I’m realizing everyone doesn’t need to know everything. I’m shifting my priorities.”

Hmm, okay. We suppose that living out your relationships on a popular reality show isn’t exactly good for interpersonal connections, but Kanye West also lives out his relationships via rap songs (the good and the bad).

Kimye spend it up for Valentine’s Day >>

And just a month ago, Kim explained to Jimmy Kimmel on Jimmy Kimmel Live that she will not be showcasing her new baby via reality television. “Our baby [won’t] really be on TV, it’s not going to be on our show… we want to try and keep it as private as possible.”

The public doesn’t expect Kimye to be secretive or private — and honestly, Kim Kardashian is famous for her attention-seeking behavior — so let’s just hope the pair realizes their requests for “privacy” sound a bit hollow.