New dad Nick Lachey understands the importance of getting a good night’s sleep. So, naturally, he’s releasing a lullaby album! 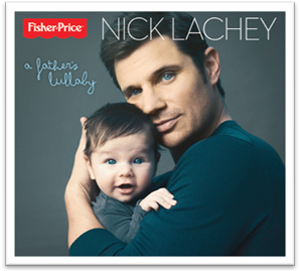 Nick Lachey is be gearing up for the new 98 Degrees album and tour with New Kids on the Block and Boyz II Men, but first he’s releasing a solo album.

And it’s not just any solo album. The new dad of baby Camden — with wife Vanessa Minnillo — inspired him to team up with Fisher Price and Mood Entertainment for an album of lullabies.

“When I first learned that I was going to be a father, I was inspired to create a special tribute to my son,” Lachey said of the process behind the album. “Music has always been an incredibly significant part of my life and a meaningful way in which I express myself. Creating this album allowed me to further connect with Camden while also sharing the experience with families who are on a similar journey of welcoming a new life into their world.”

A Father’s Lullaby — scheduled for release on iTunes and Amazon on March 13 — will feature the original songs (penned by Lachey himself!) “Father’s Lullaby,” “Once Upon a Time,” “Sleepy Eyes” and “Another Day Is Done.”

The album will also include lullaby standards like “All Through the Night,” “Baby Mine,” “You Are My Sunshine,” “All the Pretty Little Horses,” “When You Wish Upon A Star,” “Godspeed (Sweet Dreams),” “Hush, Little Baby” and “Brahms’ Lullaby.”

We never pegged Lachey as this type of singer, but his smooth, silky voice is perfect for such soothing songs. Plus, it totally fits his “hands-on” dad personality.

And how hands-on is he as a father? Uh, very.

“I was actually joking earlier that if Nick could nurse Camden he would! If he had boobs he would do it!” Minnillo joked to SheKnows last year.

Tell us: Will you buy Nick Lachey’s lullaby album?

Read on for more Nick Lachey

98 Degrees has advice for One Direction
Nick and Vanessa Lachey debut their baby on Twitter
Nick Lachey on kids, his new album and volunteering