A child eerily similar in looks to Suri Cruise has been spotted shadowing Suri and Katie Holmes. Is this the work of a security-obsessed dad? 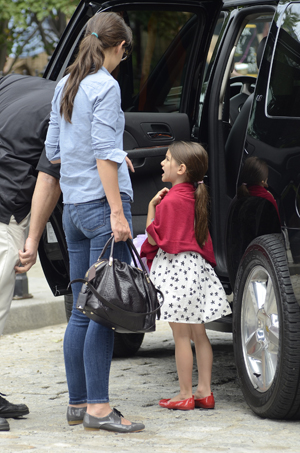 Suri Cruise has a doppelgänger, reports the New York Daily News, and her oddly similar movements are making some suspect dad Tom Cruise has hired a body double for his daughter over security concerns.

As the Daily News reports, Suri was picked up by mom Katie Holmes Friday after school in a black SUV, and then they made their way to their Chelsea home, “trailed, as they always are, by photographers,” wrote the Daily News.

Soon the mom and daughter re-emerged, getting back into the black SUV and heading downtown, presumably to Greenwich Street’s ‘wichcraft sandwich café.

But somewhere along the way, the vehicle stopped at a police station and a child who could have been Suri’s twin got out. She was wearing a coat identical to Suri’s puffy down one, as well as the same black leggings and Ugg-like brown boots with pink soles.

Her long brown hair was Suri-like, and she tried to hide her face as photographers who assumed she was Suri swarmed to snap shots.

Moments later, the real Suri Cruise pulled up to the side entrance of the TriBeCa building that houses ‘wichcraft. Suri and her nanny swooped inside swiftly.

“The identity of Suri’s alleged double wasn’t immediately known and it’s not clear if her duties extend to being TomKat’s daughter’s playmate,” the Daily News wrote. “But the little imposter is apparently friendly with Holmes, who was photographed talking to her a month earlier.”

Sources spoke to the Daily News and stated that Cruise has a “mania for security,” asking for the names of all of Suri’s playmates so that he can check them out before his daughter visits.

The sources also claimed Tom Cruise has increased security around his daughter and spoken with a kidnapping specialist.

Cruise is known for his attention to security, with stories noting such attempts as Cruise’s people taping up security cameras on the floor of the Icelandic hotel where the family was staying and using a Taser on one of Cruise’s neighbors.