As tour dates and television appearances continue to get canceled, is Morrissey becoming a lame duck? 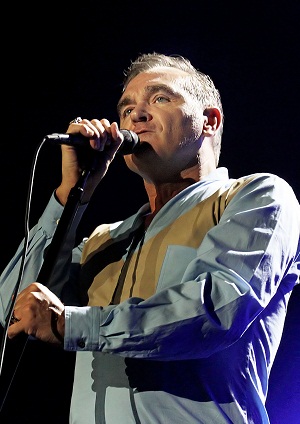 Hey Morrissey fans! Were you stoked to see your favorite Smiths member perform on Jimmy Kimmel Live this week? We hate to break it to you, but it looks like it won’t be happening. As it turns out, Morrissey’s animal activism is more important to him than keeping his word.

Here’s the scoop: Morrissey was originally scheduled to appear on Jimmy Kimmel Live this Tuesday night. However, he has since decided against it. Why? His fellow guests that night were to include the cast of that awesomely redneck show Duck Dynasty.

We’re not making this up! Morrissey’s people actually spoke with E! News about the situation.

“Morrissey is thankful for being invited to perform on Jimmy Kimmel Live tomorrow, Feb. 26. However, he cannot morally be on a television program where the cast members of Duck Dynasty will also be guests. Morrissey would be honored to play the show, if Duck Dynasty were removed.”

Nothing new here: Morrissey gets overly dramatic about meat >>

Later, everyone’s favorite vegan went on to make a statement himself.

“As far as my reputation is concerned, I can’t take the risk of being on a show alongside people who, in effect, amount to animal serial killers. If Jimmy cannot dump Duck Dynasty, then we must step away.”

Here’s the thing: We can all appreciate someone who sticks to his guns and stands up for what he believes in, right? The problem arises in two places. First, he’s not being forced to eat meat or even converse with them. We also seriously doubt Jimmy Kimmel is using the show to promote the eating of meat or slaying of ducks.

He’d probably even be cool with letting Morrissey join Duck Dynasty‘s Robertson family onstage so they could have a discussion on the ethics of meat eating. Kimmel is cool like that.

Second, Morrissey already gave his word. It’s admirable to have a strong belief system, but you also need to be reliable. Pulling out because you don’t agree with another guest’s lifestyle is just a little, well, lame.

Morrissey gives his opinion (and, once again, no one asked for it) >>

Recently, Morrissey and his band have had to cancel a few tour dates due to health issues… this was at least one way for his fans to get to see him and now he’s ruined it. What a bummer. Luckily for Morrissey, he’s got the kind of rabid fans who will only praise him for his decision instead of being annoyed over his lack of reliability.