The two made their careers with a teen fantasy drama, but the worlds were brought together Sunday night when Bella and Harry Potter presented together at the Oscars. 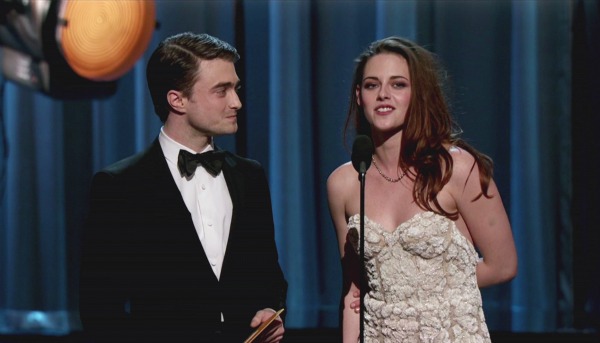 It’s the clash of the fantasy fiction stars. Sunday night at the Oscars, Harry Potter’s Daniel Radcliffe finally met Twilight’s Kristen Stewart. In fact, the two presented an award together at the ceremony.

Stewart had to limp onto the stage, and the gentleman in Radcliffe said he felt awful about it.

“I felt so bad,” Radcliffe told E! News. “I just wanted to pick her up, put her in my arms and carry her onto the stage.”

However, Radcliffe is not too confident that he could have actually lifted her up.

“I probably would have dropped her and opened her wound again,” Radcliffe joked.

Stewart said she had to bring the crutches because she had cut her foot on glass.

Radcliffe felt like it was finally time the two of them met, since both of their career-making roles were in very similar genres.

“I felt like this was a long time coming. I feel like we’ve been meant to meet,” Radcliffe said. “This was the perfect way. And you know what? She is so nice — really, really nice.”

He also met two fellow actors Channing Tatum and Joseph Gordon-Levitt backstage and had what he felt was a profound moment with them.

“I looked at them and was like, ‘Remember your first day of work on your first job? Could you believe we’re doing this now?'” Radcliffe told E! News. “They were actually thinking the same thing. The night has been surreal. I never thought I’d be doing any of this.”

The Oscars try something new with a musical theme >>

The 23-year-old had many exciting moments for his first trip to the Oscars, and was excited about each part of it.

“It was fun,” he said. “I can’t say enough good things about Seth MacFarlane. I hold him in the highest regard.”

Radcliffe has been working on different parts now that the Harry Potter series is finished. He currently has at least three projects in the works, all set to be out in 2013.