Things take a turn for the worst for everyone when more followers arrive and ruin the FBI’s plan to rescue Hardy and Joey. 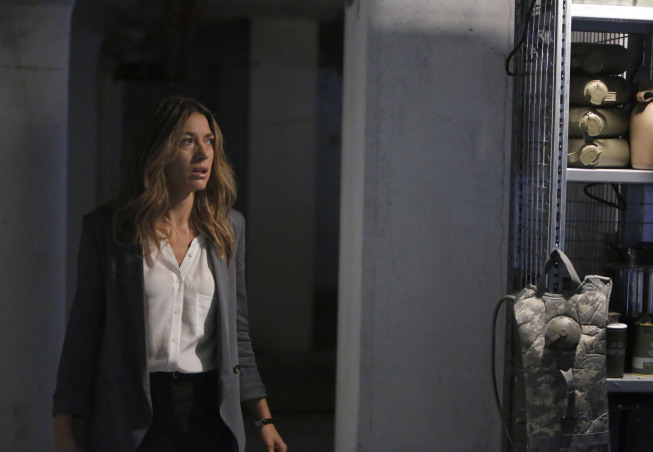 This week’s episode of The Following was jammed with twists, turns and dead bodies. I forgot to take a breath with all the suspense. One thing this show has been great at is not giving us happy endings and “The Fall” was no different.

Emma (Valorie Curry), Jacob (Nico Tortorella) and Paul (Adan Canto) have collected quite a few hostages at this point. There’s Joey, Megan and now Ryan Hardy (Footloose star Kevin Bacon) all trapped within the little farmhouse that is now surrounded by the FBI (who are not really doing anything except trying to get Emma to talk about her mother issues).

Why Bacon decided to tackle TV >>

Things take a turn for the worst when Emma escapes with Joey, leaving Paul and Jacob behind. Hardy gets a hold of a knife, cuts his way through his ropes, stabs Paul in the gut and busts out with Megan. He’s able to get Megan to safety and tries to coordinate with Weston (Shawn Ashmore) to capture Emma.

Weston is working with a local female cop when they run into Emma and Joey. The sweet-faced cop suddenly shoots Weston (don’t worry, he’ll live) and helps Emma and Joey. Hardy finds the women by a black SUV and shoots the dirty cop before she even has a chance to blink. But, scared Joey gets into the truck with Emma and they drive away before Hardy can intervene.

Then, another Carroll (James Purefoy) follower appears as FBI, kills a couple agents and helps Jacob and Paul get away. They make it safely away from the scene and try to make contact with Emma. She answers her cell phone, but refuses to say a word when they ask her why she abandoned them. Meanwhile, Paul’s bleeding out and it’s not looking good.

As for Claire (stylish Natalie Zea), she was able to get away from her kidnapper because he’s in love with her. He tried to kiss her, was immediately overwhelmed with guilt for betraying Carroll and bashed his forehead into the wall repeatedly. That’s one way of dealing with regret. So, she’s home now and pretty furious with Hardy for not keeping his promise and bringing her son home.

What will happen now that the trio has been broken? Will Emma be able to pull this off on her own or is there another man she’ll seduce and yell at to impress Caroll? Whatever happens, she’s clearly everyone’s next target.