Another celebrity in Hollywood is putting a ring on it as a rep for Saturday Night Live alum, Andy Samberg, confirms that the funnyman is engaged to musician Joanna Newsom. 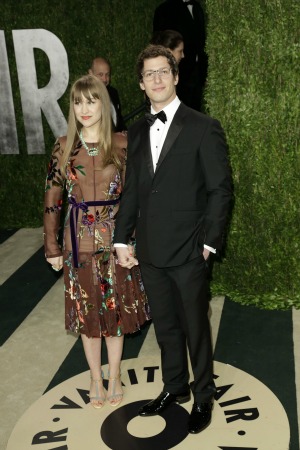 One funnyman is taking his love life seriously. That man is former Saturday Night Live star Andy Samberg who is engaged to singer-songwriter Joanna Newsom. US Weekly was the first to report the big news.

The couple has been dating for five years and they have led a relatively private life during their courtship.

A source tells US Weekly that the duo were smitten from the very beginning saying, “He liked her music and would go to her shows. He had the biggest crush on her.”

With Samberg having his own music bent after creating viral videos on SNL like “Lazy Sunday” and “D**k in a Box”, it appears that the relationship was a perfect match.

The 31-year-old bride-to-be loves all of his quirks.

A friend of the couple also told US Weekly, “She respects what he does with his songs. She’s so proud of everything that he has accomplished.”

While there is no word as to when the wedding will take place or even how the engagement went down, it is fun to speculate who might be on the official invite list. Will fellow SNL alums like Tina Fey and Jimmy Fallon make the cut or will it be newlyweds Justin Timberlake and Jessica Biel in attendance? Samberg did attend the Biel-Timberlake nuptials in Italy last fall.

Nick Carter found “The One” >>

Samberg just finished hosting duties at the Independent Spirit Awards last Saturday. He also has the comedy The To Do List coming to the big screen in August and he’s currently voicing the sequel to Cloudy with a Chance of Meatballs.