Celebrity trendsetter Jaime King chats with SheKnows about her tips for looking fabulous while filming Hart of Dixie and Sin City 2. 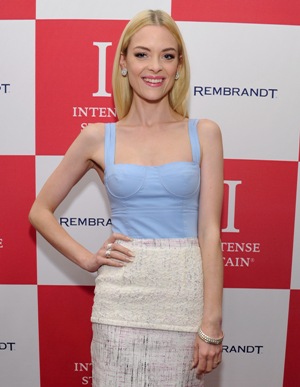 “Oddly, I’m a tomboy/girly girl,” Jamie told SheKnows while sipping a Coke at the cocktail party. “If you see me during the day, I’m wearing like sweat pants, a baseball hat, and a hoodie. I’m mellow during the day, so at night I turn it out.”

Similarly, her character Lemon on Hart of Dixie is also a major style icon, building quite the following with young fashionistas everywhere. And it’s no surprise, considering King helps create her look. She told us that Lemon’s style is inspired by Grace Kelly.

“The costume designer and I, we make a lot of our dresses,” said King. “We choose the patterns, and fabrics. It’s really an honor because now they’re in the Warner Brothers museum. We wear a lot of Marc Jacobs, Valentino, and Rachel Zoe.”

Unlike Lemon though, King says her personal style is much edgier.

“I would say my style is a lot more avant-garde,” she told us. “I love high fashion. I take a lot more risks than Lemon ever would, darker colors and stricter lines. I can’t wear black or dark colors as Lemon.”

And with the uber-hip Rachel Blison as a co-star, the two style mavens get in plenty of shopping on set.

“Rachel and I are both obsessed with fashion,” said King. “You really get to see the dualities of east coast girls vs. the more classic looks. We shop together online on set. We’re both on ShopBop.”

Check out our interview with Hart of Dixie star Scott Porter >>

As for beauty, the radiant King relies on three important factors to keep her look clean.

“My must-have beauty products are Rembrandt whitening strips, moisturizer, and water. The strips dissolve in 5-10 minutes, so they’re perfect to use on my way to and from events. There’s nothing else like them on the market. Water is basically free and it helps your hair, and your skin. It’s a philosophy of mine, beauty is about your health and well being.”

With her highly anticipated sequel, Sin City: A Dame to Kill For coming out this year, fitness is also an important aspect to Jaime’s look. She credits her amazing bod to eating healthy organic foods and keeping up a fun fitness routine.

“I don’t diet. I feel like it’s really important to just eat balanced,” she told SheKnows. “And I use Ballet Beautiful by Mary Helen Bowers. She trained Natalie Portman for Black Swan. It’s ballet fitness. She does online classes. It’s really, really fun.”

Though she’s done filming for Sin City, Jaime told us she will actually be surprised when she sees the final cut. King had to film her scenes alone since the entire cast wasn’t set in stone when her scenes were shot. In the editing process, they will add in her co-star.

“It was really fun because I got to do the part that was in the comic book,” said King. “I was there the first day of filming when nobody else was cast except for Jessica Alba, Mickey [Rourke], and [Rosario Dawson]. None of the other people were cast so I was acting to someone’s hand. Imagine doing all your scenes with no one. Is it going to be Fassbender? Is it going to be Levitt? Brolin? It was a real trip.”

You can find out who Jaime King stars with when Sin City: A Dame to Kill For comes out in October. And in the meantime, catch her every Tuesday on Hart of Dixie!

14 hrs ago
by Scarlett Harris