Erin Andrews encounters a sleazy 50 Cent during the Daytona 500 and he just can’t seem to take no for an answer. 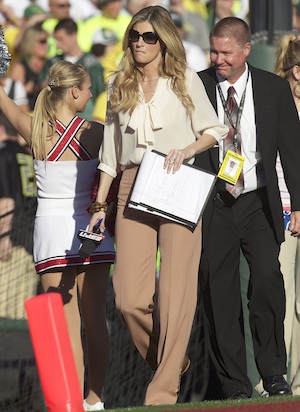 Erin Andrews is talented and beautiful. Unfortunately for Andrews, it seems some men just can’t act professionally toward her and have no qualms about literally chasing her on-camera for some additional affection.

That’s where rapper 50 Cent, real name Curtis Jackson, comes in: the hip hop star spotted Erin Andrews at the Daytona 500 and even though she politely — and assertively — rebuffed his overt advances for hugs and kisses, 50 Cent continued to trail her through the crowd. Disgusting.

Erin Andrews was with her camera crew for Fox Sports looking for driver Danica Patrick when she inadvertently came across 50 Cent. She politely hugged Jackson and handled his demands for a kiss, seemingly on the lips, with grace as she quickly turned her head so his lips landed on her cheek. 50 Cent wasn’t satisfied, though, and reached out for another hug. While Andrews continued on her way to find Patrick, 50 Cent actually followed her with his arms outstretched and checked her out as she walked ahead of him.

50 Cent’s encounter with Erin Andrews is obviously awkward and borderline offensive. You can check out the video footage of their meeting below. The chauvinistic and sexist move is clearly lost on 50 Cent when he tweeted just a few hours after the video went viral, “Hey I wanted to kiss her so I did.”

It just goes to show Erin Andrews has to deal with sleazy guys pretty much nonstop at her job.