Kim Kardashian’s learned a thing or two about judging other people. The mom-to-be previously had strong feelings about having a baby before marriage, but is now eating a slice of humble pie. 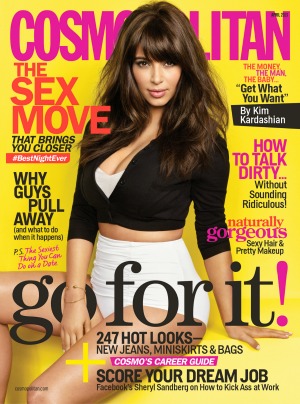 Kim Kardashian, Cosmopolitan magazine cover girl, is showing off just a sliver of (pregnant but not showing yet) mid-section skin on the April 2013 issue. Opening up about pregnancy, relationships and marriage, the mom-to-be says she now believes she can have it all.

Admitting she was judgmental of sister Kourtney Kardashian, who got pregnant with son Mason (and later daughter Penelope) with no ring from Scott Disick, Kim Kardashian explained to Cosmopolitan, “I was like, ‘You’re not married! How could you do this?’ I was really firm and strict. But she was like, ‘Marriage isn’t what I want.’ And later, I realized she had a better family life than I did.”

Speaking of sister Khloe Kardashian‘s rushed walk down the aisle, the mom-to-be, who is still married to estranged husband Kris Humphries, went on, “I saw fast marriages like Khloe and Lamar’s and that was what seemed to work. [Now] I say give it a good six months before you commit. Feelings change, even if it seems so lustful.”

“Sometimes you’re just not ready. A person could have it all, and you’re not ready for it all. But this is where I probably always should have been…[marriage] is something I know that we both want in our future, but I don’t have this sense of urgency about it. I have this best friend who understands me and helps me through all my tough experiences, and vice versa, you know? It just feels like this is it for me.”

Luckily, the reality star (for now, at least) sees getting pregnant nine months into their relationship as perfect timing, rather than rushed. The 32-year-old shared, “I’ve always said that I wanted kids, but I don’t think I ever would have been ready until now.”

Looking forward, she added, “I used to think, ‘Well, can you really have it all? The truth, the excitement, and the passion?’ Now I know you can.”

Check out more from Kim Kardashian when the April 2013 issue of Cosmopolitan hits newsstands on March 5!

Do you think a happy, drama-free future is in the works for Kim Kardashian?