Anne Hathaway looked gorgeous in the pale-pink Prada she chose for the Oscars last night. But one aspect of her look is getting all the attention. 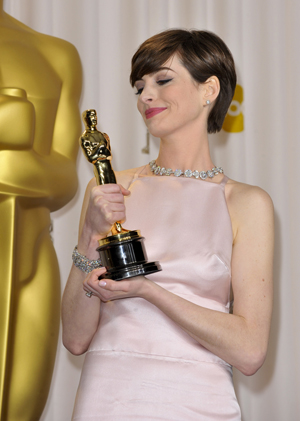 “Anyone else feeling a little chilly?” That’s what Anne Hathaway‘s nipples were asking at last night’s Oscars — that is, if the Twitter feed AnneHathawayNipples is to be believed.

The satirical account appeared almost immediately after the Best Supporting Actress award-winner said on the red carpet that she’d chosen the dress just three hours before she had to be at the ceremony.

“I was working too hard!” she laughed. “This was the one that spoke to me in the end. I like it.”

Hathaway’s choice of the Prada came as a surprise to designer Valentino, who had created a custom-made dress for the actress to wear for her big night.

According to Fashionista, the actress impulsively changed her mind about the dress when she saw Amanda Seyfried’s gown, a lace Alexander McQueen number that Hathaway thought was too similar to her own Valentino dress.

Not wanting to compete with one of her Les Misérables co-stars, Hathaway “freaked out” and asked stylist Rachel Zoe to bring in several dress choices ASAP.

So was that why the bust darts on the Prada gown lay awkwardly on Hathaway’s bust, creating the illusion of permanently erect nipples? No time to tailor?

No one’s talking today. Except for @HathawayNipple, which posted last night, “We’d just like to point out that we won Best Supporting Actress without *any* support” and “SO glad we didn’t poke Kristin Chenoweth’s eyes out.” Ha ha!

Starting snarky Twitter accounts to comment slyly on the Oscars is beginning to be a bit of a trend. @AngiesRightLeg started its life just after the 2012 Oscars; last night it posted “just say no to @hathawaynipples SHE is NO ME!”