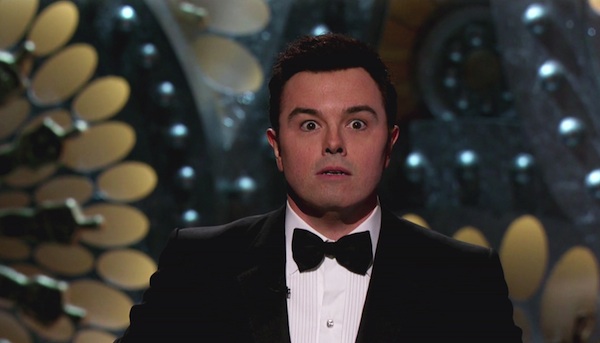 Seth MacFarlane hosted the 2013 Academy Awards Sunday night, and while many loved his Oscar hosting, there’s an equal amount of backlash over his unsurprisingly crude style.

Many media outlets like Gawker and the Huffington Post describe Seth MacFarlane as “tasteless” and “self-centered.” Looking back, there were certainly moments when the usually elegant Academy Awards seemed like it was in the middle of a Family Guy episode.

Seth MacFarlane too trashy for the Oscars with “We Saw Your Boobs?” >>

Writes Gawker journalist Kate Bennert, “At this point there’s no question that Seth MacFarlane was a terrible Oscar host. Not only were his jokes unfunny, tired, self-centered and boring, but also incredibly sexist, homophobic and racist. Boob jokes. Diet jokes. ‘No homo’ jokes. Rape jokes. Abuse jokes…” So Seth MacFarlane gets a scathing Oscar host review stemming from a lack of political correctness from a snarky gossip website? Now that’s original.

And while it’s difficult to believe Bennert’s take on MacFarlane, the Huffington Post did notice the “tasteless antics” of Sunday’s Oscar host might have been forewarned given Seth MacFarlane’s comedic approach. In other words: what did Oscar show producers expect? Regardless, MacFarlane’s approach was generally not appreciated.

“Look, I’m not a prude,” writes Michael Russnow for the Huffington Post. “You don’t have to be sweetness and light and/or just mildly funny, but as Tina Fey and Amy Poehler displayed at the Golden Globes you can find the right mix to be biting and clever without resorting to cheap, shocking, and sometimes hurtful jokes.” Russnow goes on to explain Seth MacFarlane was “poised, handsome, and charming” when he laid off the Family Guy humor.

Notably, the early failure of MacFarlane’s Oscar humor resorting to his minimal appearances throughout the show caused Russnow to speculate if Oscar producers knew the host had failed almost immediately.

Check out one of the night’s biggest comedic blunders, the “We Saw Your Boobs” song.

Was Seth MacFarlane trash or or class at the Oscars?