Sunday night’s Oscars were memorable for many reasons, but we prefer to profile the moments you may have missed – those candid audience shots that can tell us so much about a celeb’s true personality. If you DVR’d the Oscars (is there another way to watch this marathon?), play it back to these moments… 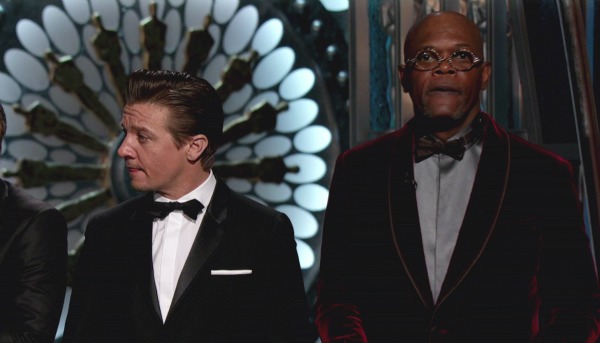 If you watch Seth MacFarlane when he’s talking to William Shatner on the big screen, you’ll see Helen Hunt and Samuel Jackson off Seth’s right elbow. If you keep watching, you’ll wonder if these two left their funny bones at home. After MacFarlane performs We Saw Your Boobs, we see giggles galore behind Seth, except from the two front seats, filled by Helen Hunt and Samuel Jackson. When Shatner tells MacFarlane that Seth joins the “Gay Man’s Chorus of Los Angeles” in 2015, we observe a sea of toothy grins behind MacFarlane except from Mr. and Ms. Can’t Take a Joke. Finally, after Seth’s sock-puppet parody of Flight, these two smile. (Maybe someone reminded them they were right behind Seth and thus, on camera for most of the opening act.) 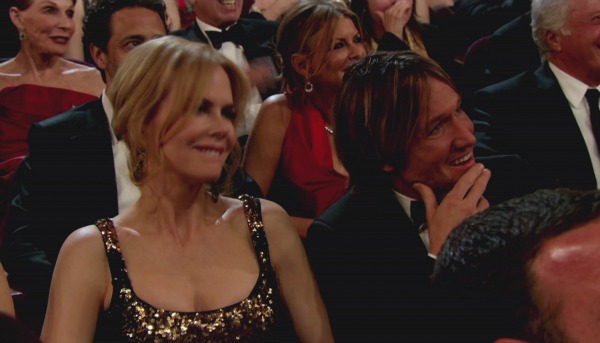 If the Oscars gave out a “sweetheart” award, last night it would have gone to Jennifer Lawrence and Nicole Kidman. “Nic,” as her talented husband Keith Urban affectionately calls her, made a frowny face and mouthed the words “poor thing” when Jaws music played at the end of the acceptance speech from the visual effects team for Life of Pi. Jennifer giggled every time the camera was on her and burst out laughing when Seth joked that 9-year-old Quvenzhané Wallis said, “I hope I don’t lose to that old lady Jennifer Lawrence.” Of course Jennifer also tripped heading up the stage to accept her Oscar for best actress, so maybe she had a flask in her designer purse. Whatever the reason, she was one celebrity who appeared to be in an extremely good mood. 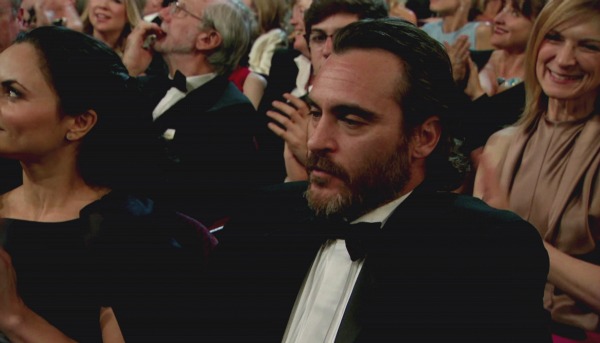 From the other side of the “good mood” aisle we have Joaquin Phoenix. If you’ve been living under a rock, let us remind you that Joaquin has been very vocal about his disdain for the Oscars. Last night, his body language asserted his position. When his name was called out for his best actor nomination, he was chewing something, looking down and then shook his head! He acted like he was at a minor league baseball game, with a mouthful of sunflower seeds and his team had just struck out. Tommy Lee Jones, after being a complete grump-face at the Golden Globes, turned his frown upside down last night and was all smiles from his perch in the audience.