The sun will come out tomorrow for Quvenzhané Wallis, who’s officially signed on for Sony’s big-screen adaptation of the Broadway musical Annie. 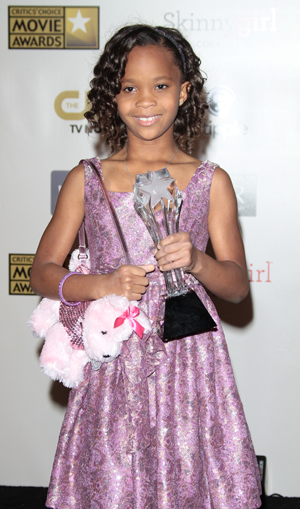 Some wondered if being the youngest Best Actress nominee ever at this year’s Oscars might level a curse on Quvenzhané Wallis’ future career. Doesn’t look like that’s going to happen: The 9-year-old has signed on to take the lead role in Sony’s buzzed-about Annie reboot.

Will Smith and Jada Pinkett Smith’s Overbrook Entertainment production company began developing the project several years ago, with an eye toward casting daughter Willow Smith in the lead role. But at an elderly 12, Willow was deemed too old to take on the role of the plucky orphan, said to be 10 in the original Little Orphan Annie newspaper comic strip, in the blockbuster Broadway musical adapted from the strip, and the 1982 movie adapted from the stage musical.

“With the recent Academy Award nomination and critical acclaim, Quvenzhané Wallis is a true star and we believe her portrayal as Annie will make her a true worldwide star,” Sony production president Hannah Minghella said in a statement reported by Entertainment Weekly.

“She is an extraordinary young talent with an amazing range, not only as an actress but as a singer and dancer, and we can’t wait for audiences to further discover her,” Minghella added.

Wait, so Wallis can act and dance and sing and sport the chic-est purse ever seen on the red carpet? That’s a quadruple threat!

Jay-Z is set to produce the soundtrack for the movie. Anyone else starting to get the feeling that this Annie will look and sound a little different than the much-beloved 1982 film which starred Albert Finney, Carol Burnett and Aileen Quinn as the redheaded orphan?

That movie boasted hits like “Tomorrow” and “It’s a Hard Knock Life,” a retro look and little Quinn in a curly red wig and red-and-white dress that’s so iconic it’s still used as an instantly recognizable Halloween costume, more than 30 years after the movie came out.

Director Will Gluck (Easy A) is attached to helm the project, and the original screenplay was written by Emma Thompson. Yes, that Emma Thompson! She writes scripts too, you know. For instance, she wrote both of the Nanny McPhee movies in which she starred, as well as 1995’s Sense and Sensibility.

Will she write a role for herself in the Annie remake? Can we hope she’ll take on the role of Mrs. Hannigan, the boozy orphanage proprietress Carol Burnett played so memorably in the 1982 movie?