Jennifer Lawrence responds brilliantly to obvious and dumb questions about her now infamous fall at the Oscars. 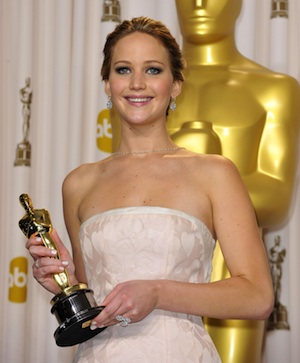 Jennifer Lawrence is quickly becoming America’s sweetheart, but not for the reasons you might expect. While she is only 22 years old, she has a sense of humor and easy-going personality that starkly contrasts with her rapidly rising A-list status — a celebrity that relatable in a completely authentic way.

Get the Jennifer Lawrence Oscar look >>

At the 2013 Academy Awards Lawrence proved she’s still like everyone else. Not only did she take a super embarrassing fall up the steps of the Dolby Theatre to accept her win for Best Actress, she handled the (several) questions from the press about her trip up the steps with humor and honesty.

When E! News asked the actress about her fall at the Oscars and the obvious question of “What happened?” she laughed as she explained, “What do you mean what happened? Look at my dress! I tried to walk up stairs in this dress that’s what happened. I think I just stepped on the fabric and they waxed the stairs…”

It seemed that Lawrence’s response about her fall would resolve any remaining uncertainty about just what happened when she tripped, but the next question in the press room came from a German reporter, who probed her to reflect on the moment. He asked Lawrence what was going through her mind as she fell face first onto the steps.

“What went through my mind when I fell down? Uh, a bad word that I can’t say. (Laughs) That starts with ‘F.’ “

We love Lawrence’s humorous and refreshing perspective on her fall at the Oscars, and her ability to remain seemingly authentic in an extremely rehearsed environment.