According to Charlize Theron, she had no idea what she was signing up for! 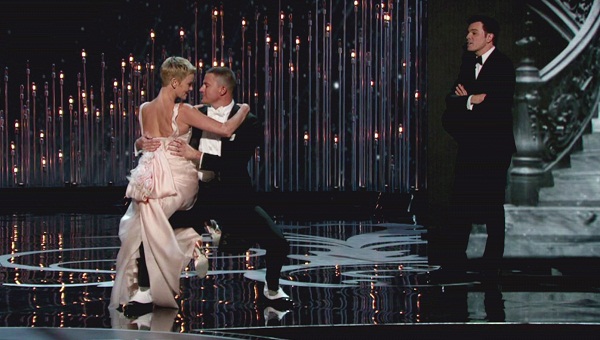 “I was sort of tricked into it,” Theron told an E! reporter. She went on to explain, “I thought it was going to be something smaller, like he [Seth MacFarlane] pulls me up from the audience and we do a little spin. But then he was like, ‘Rehearsals start Monday!'”

To be fair, we have seen their boobs >>

Sure, dancing in front of all her peers, plus millions of viewers at home was certainly nerve-wracking, but it seemed like she did a really decent job! She looked absolutely beautiful when Channing Tatum swirled her around on stage.

For many viewers, the only downside for the performance was how incredibly close Tatum was. When the reporter asked Theron what she thought of that, she was quick to remind everyone that he’s more than just a ripped body.

“He’s so classy—and he’s about to be a dad!” she told E!. Well played, Charlize.

Theron wasn’t the only star to take to the stage for a dance during the opening scenes. We also got to see MacFarlane, Joseph Gordon-Levitt and Daniel Radcliffe do a little soft shoe, old-school Broadway-type number. Those boys were smooth, too!

Later, we were given a special performance from Catherine Zeta-Jones when she relived one of her moments from Chicago while scantily clad in one of those sexy costumes. Even if she was lip-synching to a pre-recorded track, she still nailed the dance moves!

Still, our winner for the actor-turned-dancer of the night was Theron. It sounds like just about all the Oscars viewers felt the same way. She and Tatum were super graceful. We’re glad she was tricked into the performance!