The awards show decided to go in a new direction this year, thanks to its producers. The theme of the night was music — and it carried through everything that happened. 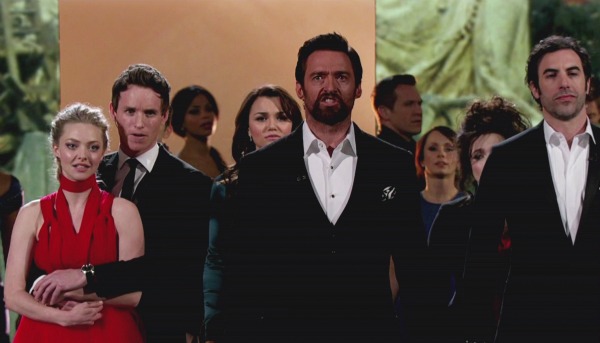 The Oscars decided to change things up this year, quite a bit. The show hired two new producers, Neil Meron and Craig Zadan, and as soon as the names were announced, people had a hint of what to expect at this year’s awards ceremony.

Meron and Zadan’s specialties are musicals, including the modern versions of Hairspray and Footloose and the TV musical Smash. When they hired Seth MacFarlane as host, the musical possibilities grew significantly. While MacFarlane is known for his show Family Guy, he regularly does musical bits and is quite the musician (he was even nominated for an Oscar this year for Best Song).

Meron and Zadan then announced a first: a theme for the show. They said they would be honoring music in film, and they lived up to that promise. The theme was evident in everything that happened. They first brought in Dame Shirley Bassey to sing “Goldfinger,” a song she helped make famous.

The show also wanted to honor recent musicals that made it to the Oscars. Catherine Zeta-Jones performed “All That Jazz” from past Best Picture winner Chicago. The best thing about the performance was that it was similar to one in the movie, something she was never able to do when the film was up for its awards. In 2003, Zeta-Jones won the award for Best Actress for the film and sang the song for the ceremony. But she was eight months’ pregnant at the time and wasn’t able to perform as she had in the film. She more than made up for that on Oscar night this year.

The most “interesting” Oscar musical performances of all time >>

Jennifer Hudson followed up on that performance with her song from Dream Girls, a film she won an Oscar for in 2007. Adele then sang her Oscar-nominated song “Skyfall” from the film of the same name. On the red carpet, she seemed absolutely giddy to be there, saying, “I feel like Beyoncé.”

Many of the stars of Les Misérables also performed, providing what ended up being one of the most emotional moments of the night.

There were many musical surprises at the show as well. During the “In Memoriam” segment, movie conductor Marvin Hamlisch appeared on screen (he passed away in August of 2012), and Barbra Streisand then appeared on stage.

The actress appeared emotional and said Hamlisch had passed too soon. She then sang “The Way We Were” from the 1973 film. (The song has appeared on soundtracks since then more than 30 times.)

“During the course of the show, at some point, Barbra Streisand is going to come on and do something really special and blow people away,” Zadan had told The Hollywood Reporter. “We told her we couldn’t imagine celebrating music in the movies without her, and she said she’d love to.”

Streisand did indeed blow people away. And she hadn’t performed at the ceremony since 1977.

The show ended the way it began, with a song. MacFarlane and Kristin Chenoweth sang a song for the losers.