No one knew what to expect with Seth MacFarlane as the Oscar host, but he ended up giving the show just the energy it needed. 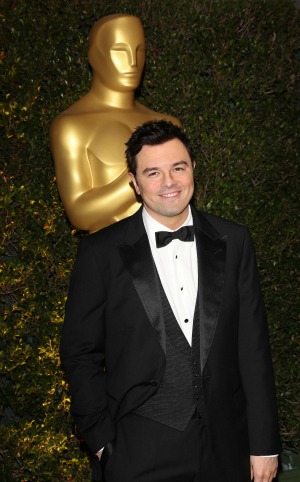 But Seth MacFarlane may have been the best choice for the 2013 Oscars because of his love of singing and comedy. He kept his comedy fairly clean, and his singing was full of class and jokes (sometimes even at the same time).

The show started with MacFarlane’s opening monologue/musical pieces and included Captain Kirk. Or rather William Shatner as Captain Kirk. He said he was calling from the future and wanted MacFarlane to know he did a bad job hosting but could still turn it around. He then showed him videos of what the Oscars looked like without Shatner’s help.

One of those videos was of a song Captain Kirk deemed too crude to perform on the show, called “We Saw Your Boobs.” The song was basically a list of famous actresses who have showed their chests in movies.

MacFarlane also had help from some famous friends with his opening number. These included Channing Tatum and Charlize Theron, who danced to “The Way You Look Tonight,” and Daniel Radcliffe and Joseph Gordon-Levitt, who sang and danced to “High Hopes.”

His most offensive piece may have been when he dressed up as a flying nun and recorded a skit, supposedly in Sally Field‘s dressing room. The skit ended with the two making out (again, supposedly).

Friendly advice for the host of the Academy Awards >>

After his opening number, MacFarlane mostly faded into the background, as many hosts are meant to do. He did announce the announcers, and he made many funny quips about those announcers. As the show went on, he seemed bored and started to apologize about the length of the show.

“And since we’ve been here so long, we’re going to start the 2014 Oscars right after this,” he said near the end of the show.

All in all, MacFarlane was the perfect balance of fun, appropriate humor and musical performance. If he had been more himself, the show might have been funnier, but he’d probably also never be invited back. His singing was a nice addition to his fun personality, and it moved the long show forward.

Despite what Captain Kirk said, MacFarlane definitely did a better than mediocre job in his first stint as Oscar host.