Jessa takes Hannah home to meet her father and both friends realize they’re more alone than they wish. 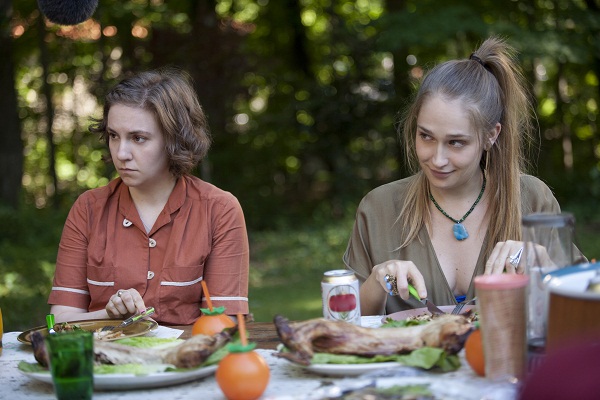 With the Oscars engrossing the world, Girls bestowed wonderful advice about how to cure a urinary tract infection. Use garlic, Jessa tells Hannah. “But I think you have to use a whole clove and really shove it up there.”

And then we see two old people stare at Hannah’s butt cheeks as she takes a leak.

Things should only go up from here for Hannah. But we know they won’t.

Sunday’s episode, “Video Games,” is a depressingly genuine tale of young people struggling to connect with their parents. While some of the plot devices are exaggerated, “Video Games” is a rock-solid follow-up to last week’s sterling episode.

Jessa (Jemima Kirke) takes Hannah (Lena Dunham) on a journey to her estranged father’s house in the countryside north of Manhattan. We’ve never met Jessa’s dad, but from a brief conversation about him, Jessa hints it’s not chummy.

We see, from the moment we meet her father, where Jessa inherits her accent and her contempt for convention. She’s a chip off the old hippie block.

How many drinks did this Girls episode lead to? >> 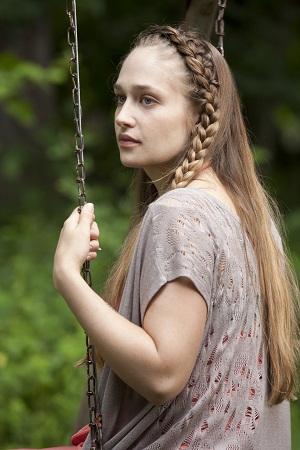 Jessa’s father lives with a woman who is not Jessa’s mother. Rosanna Arquette delivers a dynamite cameo as Petula, a cynical rabbit killer who takes an immediate liking to Hannah.

“You’re the cushion,” Petula tells Hannah. Petula senses Jessa’s disdain, so she latches on to Hannah while Jessa spends time with her dad.

We also meet Petula’s son, Frank. It’s not clear whether Jessa and Frank share a father, but Hannah takes an immediate liking to Frank (isn’t it the same with every guy though?). Frank, with his fire truck red turtleneck and retro boom box, is like a younger, skinnier version of Warren from Something About Mary.

As Hannah tries to flirt with Frank, Jessa and Poppa Hippie play catch-up as he waters the lawn. Of course, he deplores landscaping because of its banality.

The father-daughter moment eventually turns poignant. Jessa reveals a vulnerable side we rarely see. Not since she induced an abortion by blasting it out in a bathroom have we seen her so unguarded. She laments, to dad, her marriage woes and shows genuine disappointment after things with Thomas John fell apart.

Jessa is much more likable as a fragile, confused young woman. She shines in the suburbs, leaving her usual arrogance and self-aggrandizement back in Brooklyn.

Jessa’s best work takes place in between scenes when she discovers an old Penthouse magazine. While Hannah immaturely mocks the plethora of pubic hair, Jessa rattles off a sophisticated supposition about pinups’ nobility. (Did you know Rosanna Arquette once posed in Playboy?!) Sure, Jessa’s delivery is — as always — hyperbolized, but at least she’s talking with Hannah rather than down to her friend.

Things start to get weird for Hannah at the dinner table when she realizes the rabbit she pet earlier is now her main entrée. Petula sums it up best: “A rabbit a day keeps the doctor away!”

A surprise visitor, however, bails Hannah out. Tyler, one of Frank’s buddies, arrives and interrupts the family meal. Upon learning Tyler is a poet, Hannah seems (yet again!) smitten. Tyler invites Jessa and Hannah out, but Jessa quickly declines. She’s hoping to spend more time with Poppa Hippie. Too bad he and the girlfriend have plans.

Jessa attempts to mask her insecurities with debaucheries like stealing beer, encouraging Hannah to do whip hits, and blindfolding Tyler as he drives. Hannah demands they pull over so she can throw up in the woods. Frank ends up finding Hannah in a graveyard where they share a magical 10 seconds.

Jessa loses all hope when her father never returns to pick her up at the grocery store. The futility leads to an ambiguous farewell note that reads, “See you around my love.”

Did Jessa decide to take an earlier train?

Did she go look for her father?

Is she gone forever?

Either way, Hannah is on her own for the return voyage to Manhattan.

Waiting for the train, she calls home. Watching Jessa struggle with her father moves Hannah to connect with her own parents. But what was meant to be a touching moment turns into a misinterpreted mistake.

Nothing goes right for Hannah.

Not even taking a leak.