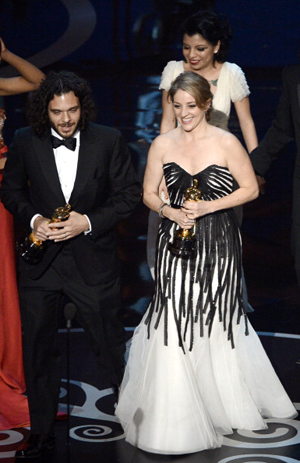 Question: Can the story of a young, homeless artist make it all the way to the Oscars?

Answer: Yes — and it can even win the Academy Award for Best Documentary Short.

Inocente — directed by Sean Fine and Andrea Nix Fine — is the story of Inocente Izucar, a 15-year-old artist who doesn’t fit in her world. Yet, the power of art gives her joy despite a bleak life.

“She had something that was sort of childlike in her vulnerability and innocence and the way she dreamed about waiting for her life to start — as well as a beyond-her-years maturity,” Andrea Nix Fine told the New York Times in a 2012 profile.

Added Mr. Fine, “We were taken with her.”

And now, things are looking way up. She’s earning anywhere from $25 to $5,000 for her paintings — an amount that’s going to increase with the documentary’s win.

She still doesn’t understand the fuss, though.

“I feel like they’re overpriced,” Izucar admitted to the Times, “especially because I like to give paintings away.”

Ultimately, the film sheds light on the huge problem of teen homelessness in the United States. The best part? It was funded by donations through Kickstarter — and everyone involved is a little more than pleased.

As for Izucar, all she wants is a place to call her own.

“I want to stay in one place,” she told the Times. “I’ve never stayed in one place for more than three months.”

Read on for more Oscars news

Actresses upset over “We Saw Your Boobs”… or were they?
Anne Hathaway’s last-minute Oscars dress switch
Did the Oscars retaliate against Joaquin Phoenix?