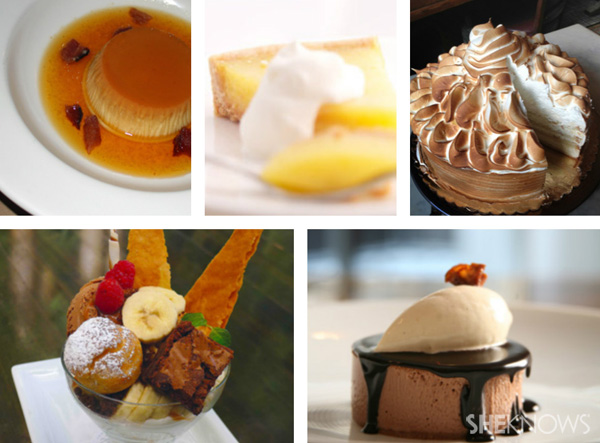 Jack the Horse Tavern, an urban upscale American restaurant in Brooklyn Heights, New York, is frequented by heavy-hitters like actors Meryl Streep, Paul Giamatti, Patrick Stewart and John Lithgow and singer-songwriter Björk. The most popular dessert is the Maple crème caramel with apple caramel and candied bacon, and it’s easy to see why!

Paola’s is an upscale Italian fine dining trattoria on Manhattan’s Upper East Side. An icon on Madison Avenue, Paola’s serves authentic regional Italian cuisine with a full list of homemade desserts that make it impossible to say “niente”! They are enjoyed by Manhattan’s finest neighborhood residents including New York City Mayor Mike Bloomberg, designer Betsey Johnson and former U.S. Secretary of State Madeline Albright. A favorite dessert of many drivers is the Torta Di Limone, a lemon tart that has the perfect blend of pure and pucker!

The Italian meringue cake, vanilla cake with meringue frosting is a favorite dessert at BOND 45, the Italian Steakhouse located in Times Square. Bond 45 is a favorite watering hole for Broadway and television stars at the end of their work days. Spotted stars have included Nathan Lane, “Smash’s” Katherine McPhee and Debra Messing, and Stanley Tucci.

The Koi SoHo is the newest location in the Koi Group’s popular chain of upscale restaurants. Since its opening, this new location has been popular with neighboring celebrities, including Leonardo DiCaprio, Kevin Connolly and Jill and Bobby Zarin. The Koi Sundae, handcrafted with vanilla & chocolate ice cream, crowned with a warm brownie, and topped with fresh bananas, is a popular choice with diners, including celebs!

The show 1600 Penn is bringing a new crowd of celebrities to Washington, DC, and they like to eat at BLT Steak. Members of the cast, including Jenna Elfman and Josh Gad, have been known to order decadent desserts like the peanut butter chocolate mousse.