These celeb-worthy desserts are meant to please even the pickiest pallets. 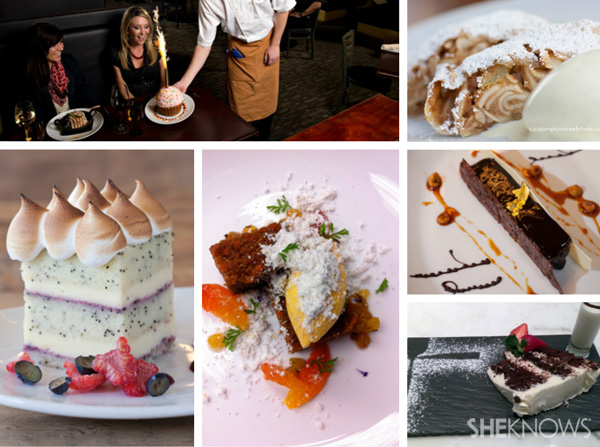 Are you hungry for something sweet? These restaurants from around the country serve their desserts to A-list celebrities, and they’re ready to serve you, too!

Did someone say cake? Arrowhead Grill is a Phoenix steakhouse frequented by tons of sports celebrities, including Wayne Gretzky. Their signature dessert is like no other, and is guaranteed to draw a crowd. The Giant Buttercake is a giant cupcake filled with ice cream or strawberry icing. It’s enough to feed a crowd, for sure!

The San Diego hotspot Herringbone is run by judge and mentor of ABC’s “The Taste” Chef Brian Malarkey. Their star-studded clientele includes Tommy Lee, Dennis Rodman, Mickey Rourke and David Arquette. This delectable dish is a fun take on the popular baked Alaska. It’s a lemon cake layered with blueberry sorbet and lemon verbena frozen yogurt and covered with torched meringue. The cake is served with a lemon vanilla gel, blueberry sauce, and fresh blueberries.

George’s California Modern, a fine dining restaurant in La Jolla overlooking the Pacific. An iconic establishment, George’s is often a destination of visiting celebrities. In 2012, George’s hosted the entire Kardashian family, and a portion of their lunch outing aired on the family’s reality show. Carrot Cake is something diners are probably familiar with, but at George’s, they serve it with a side of homemade carrot ice cream.

One of the hottest restaurants in Beverly Hills is BierBeisl, serving fine Austrian cuisine. Their ApfleStrudel, which is a classic apple strudel, is served with homemade vanilla ice cream. It makes sense that one of their most famous customers is one of the country’s best known Austrian’s, Arnold Schwartzeneger. Bette Midler and Carl Reiner also enjoy the desserts served here.

The eleven14 from eleven14 Kitchen

Jennifer Anniston was recently spotted at the eleven14 Kitchen in Greenwich enjoying an Omanhene dark milk chocolate mousse cake on an almond dacquoise, topped with a praline crispy layer and decorated with a thin caramel layer baked with crushed cocoa and coffee beans, gold and chocolate leaves, almond dacquoise with chocolate mousse and topped with gold leaf. Other celebs that frequent eleven14 include Michael Bolton, Tommy Hilfiger and Lara Spencer.

Steve Martorano is a tough-talking tattooed cook from Philly with three Cafe Martorano’s restaurants, including two in south Florida. He also happens to be a DJ who spins at his restaurants, creating a scene that’s hard to come by. Frequent visitors to his locations include Taylor Hicks, Kevin James, Tom Brady, Ryan Lochte, Joey Lawrence and Mo’nique. A popular dessert of Martorano’s is his prize-winning chocolate cake with Haagen Dazs ice cream. It’s enough to fix any chocolate craving in a hurry!

Up next: More A-list desserts >>