Love can be both entertaining and frustrating when you’re dating the girl of your dreams — especially when she may be a little crazy.

Related story Sophia Bush Joins This Is Us Season 4 in a Recurring Role — Is She Kevin's New Love Interest? 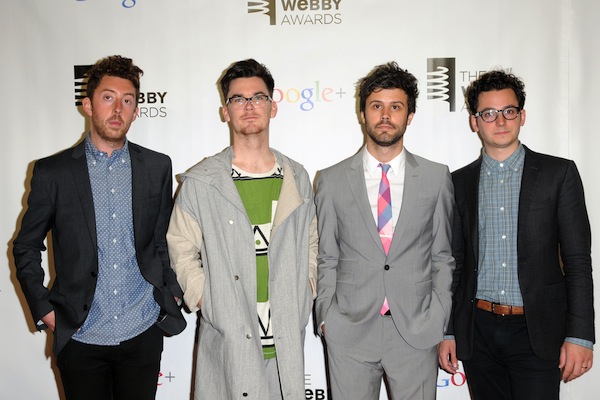 Passion Pit doesn’t have an average story. According to Artist Direct, the band “began as a one-man project of singer and songwriter Michael Angelakos to produce a Valentine’s Day gift for his girlfriend.” This obviously evolved into a full-fledged career, and I’m grateful for it. As if that weren’t enough, they have principles. Frontman Angelakos most recently went on a rant during the Oscars on Twitter referring to the film Silver Linings Playbook as a “cheap use of mental health as legs for plot,” according to Gigwise. He’s a mental health advocate, too? I can dig it, and I’m also a fan of the band’s latest music video for “Carried Away.”

Check out the review of Silver Linings Playbook >>

While I’m on the topic of mental health… the striking, borderline-crazy girlfriend featured in the music video is none other than One Tree Hill alumni Sophia Bush. She plays a dramatic, sarcastic, charming lady love who reacts passionately to every facet of the relationship. The video moves in fast-forward, and viewers catch a realistic glimpse into the pitfalls and benefits of a volatile love. It has a strangely eerie aura like Alice in Wonderland, where viewers get lost in the “rabbit hole” of their relationship. You may feel like you’re inside a vacuum, because of how lost you get in their story.

What does Sophia Bush look like on a regular day? >>

The boyfriend is a regular guy who seems both entranced and frustrated by her chaotic personality. They love and fight passionately. I personally enjoyed their dynamic and saw nothing wrong with it, but it’s likely I’m crazy myself.

The grand finale involves an animated scene where the words said out of anger rain down from the ceiling and overwhelm them. I interpreted this as how couples can dwell on words said in anger and how they begin to weigh on the relationship. It’s a profound yet comical music video, one that became an instant favorite.

It’s been said that insanity is doing the same thing over and over again and expecting different results each time, and I’ve played this on repeat and always find new ways to love it. I don’t know where that leaves me, but I hope you enjoy it the way I do.

What do you think of Sophia Bush’s performance, readers?

What else are we buzzing about? Check out our other editor’s picks: