Mario Lopez and Courtney Mazza dished on baby number two while on the red carpet at the 2013 Oscars pre-party. The big question: Do they already know what they’re having? 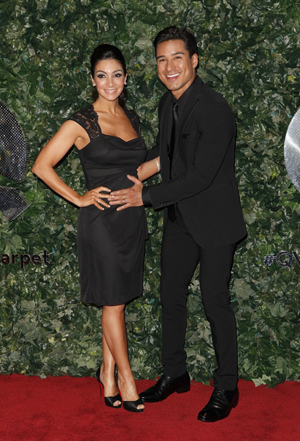 The radiant parents-to-be stopped to chat with SheKnows at the QVC Oscars pre-party — and Mazza admitted she is having some cravings.

“I like sweet stuff all the time, so that never changes,” Mazza joked to SheKnows about what she’s craving this time around, adding that licorice and chocolate are two of her go-to sweets.

Other than that, the pregnancy is going really well.

“It’s going great, I can’t complain,” Mazza added. “I didn’t know I was pregnant this time around. With Gia, I had never been pregnant before, but I knew that I was pregnant. So, this was like ‘Oh, I’ll take a test,’ because I just wasn’t feeling myself. So, some things are different, but I really can’t complain.”

So, will big sister Gia be getting a baby brother or sister? Lopez and Mazza aren’t saying.

But, is Real Housewives of Beverly Hills star Adrienne Maloof trying to move in on Lopez? The pair was spotted kissing a few nights back — though it was for a good cause, not a scandalous hookup.

“Totally made out. Right in front of my wife,” Lopez joked, adding that Maloof is an “excellent” kisser.

The kiss was up for bid at the Have a Heart Auction in honor of 20-year-old heart transplant recipient Zeke Kendall.

“She donated like 25 grand, so it was really cool,” Lopez added.

Get sloshed on Sunday with the Oscars drinking game
The Oscars: A guide to movies you probably haven’t seen
The most “interesting” Oscar musical performances of all time