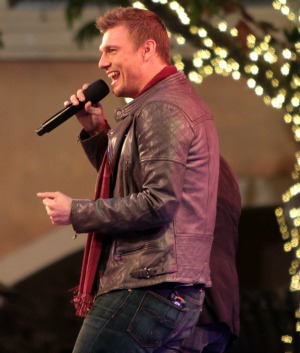 One less boy bander is available to date now that Nick Carter has officially put a ring on it. On Friday, People exclusively announced that the Backstreet Boy is engaged to his girlfriend of four years, Lauren Kitt.

The couple got engaged on Wednesday in the Florida Keys. Carter took Kitt, along with a few friends and her dad, out to a small island that he frequented as a child.

While on “Engagement Island,” the musician got down on one knee and proposed to his fitness trainer/actress girlfriend with a seven-karat diamond ring from XIV Karats.

Carter told People, “I had the ring in my pocket for two weeks. I was like, ‘I don’t want it anymore!’ It was driving me insane. I just wanted to get it out of my hands and on to hers.”

The bride-to-be was pretty surprised by the proposal. She said, “I wasn’t expecting it. It just felt very surreal. We both are just so happy in love right now and on cloud nine.”

Nick Carter gets the world’s most ridiculous haircut >>

Before the news was released in the entertainment magazine, the 33-year-old hinted on his Instagram account on Friday that something monumental had happened.

Now for the next big question: When is the wedding?

The Backstreet Boys’ schedule seems to be dictating the official date, since they are planning a new album and they have a 20-year anniversary cruise scheduled with fans in October.

Kitt said, “It’s not up to us. It’s up to the schedule. We’re just excited and looking forward to the next chapter of our lives.”

Congratulations to Nick and Lauren. We are glad you found “The One.”