Jane Lynch is trying to become the busiest woman in Hollywood after scoring two new gigs this week. She’s now a game show host and a Broadway star. 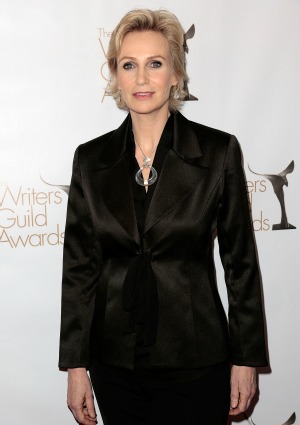 Someone is striving to become the busiest woman in Hollywood. Just this week, it was announced that Glee star, Jane Lynch, would be starting not one but two new jobs.

Lynch, best known to television audiences as ruthless cheerleading coach Sue Sylvester on the Fox musical show, will be heading to Broadway for a limited run in the revival of Annie. She will temporarily replace Katie Finneran as Miss Hannigan while Finneran shoots the new Michael J. Fox comedy series.

The role in the classic Broadway show will mark the actress’ Broadway debut. Audiences can catch her on the Great White Way from May 16 through July 14.

If a trip to New York City isn’t a part of your summer plans, then you will also be able to catch Lynch on NBC’s new summer series, Hollywood Game Night.

According to the peacock network, she will host the show, which will feature “A-list celebrities hanging out and playing games with fun-loving non-celebrity contestants in a cocktail party atmosphere.”

The show is promising to deliver on the party aspect of the show by including drinks, a live house band, and hors d’oeuvres. The show will be produced by former Will & Grace star Sean Hayes and Todd Milliner.

Exclusive: Jane Lynch on her Escape from Planet Earth >>

NBC president of alternative and late-night programming Paul Telegdy said in a statement, “With Jane Lynch on board as our host, we now have a key component in place that will further enliven the sheer fun of a raucous Hollywood party that will include real everyday people. Her exuberant wit and ability to think quickly will be the perfect match for our show which will give viewers a fresh look inside the off-set lives of their favorite celebrities — and allow them a chance to win money as well.”

The Emmy winner also seems enthused about her new job, as she said in the same statement, “The format is sure to provide a lot of unexpected results that will keep everyone off-balance and entertained.”

There is no premiere date for the new game show just yet, but keep it on your radar for some fun summer television viewing.