Rumors have been flying about the plans to reinvigorate the Star Wars franchise now that Disney’s got the reins. Original Luke Skywalker Mark Hamill says he thinks he knows where the story’s going. 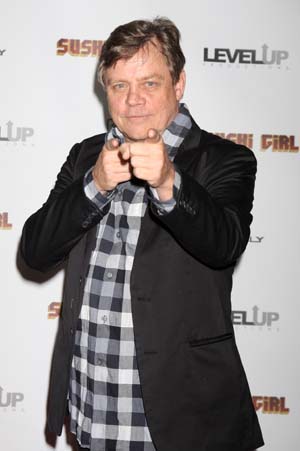 It’s just talks about talks at this point, but Mark Hamill confirms in an Entertainment Tonight interview that George Lucas had indeed asked whether he, Carrie Fisher, and Harrison Ford were interested in taking some part in the soon-to-come Star Wars sequels under the direction of Disney.

“He did say that if we didn’t want to do it, they wouldn’t cast another actor in our parts; they would write it out,” said Hamill.

Apparently, talks have gotten even a bit further than that, as scriptwriter Michael Arndt and Lucasfilm’s Kathleen Kennedy are trying to work out a time to meet with Hamill.

“Both have had meetings set that were postponed on their end, not mine,” said the pleasantly self-deprecating Hamill. “They’re more busy than I am.”

Hamill has his own ideas about where the storyline is headed. “I’m assuming, because I haven’t talked to the writers, that these movies would be about our offspring. Like my character would be sort of in the Obi-Wan range,” he said.

Hamill said that when he found out while making the original Star Wars movie that pretty much the only woman in the entire cinematic universe, Carrie Fisher’s Princess Leia, was his sister, he thought, “Well, I’m going to wind up like Sir Alec [Guinness, who played Obi-Wan]. I’m going to be a lonely old hermit living out in some kind of desert igloo with a couple of robots.”

Ha! You’re kind of loving Mark Hamill right now, right? You’re going to love him even more in a second: He actually told George Lucas to his face that CGI was screwing up the Star Wars series.

”I said to George that I wanted to go back to the way it was, in the sense that ours was much more carefree and lighthearted and humorous; in my opinion, anyway,” Hamill said. “I hope they find the right balance of CGI with practical effects. I love props, I love models, miniatures, matte paintings. I’m sort of old-school. I think if you go too far in the direction of CGI it winds up looking like just a giant video game, and that’s unfortunate,” he said. “If they listen to me at all, it’ll be, ‘Lighten up and go retro with the way it looks.'”

Also? Can the long scenes of politicians sitting around talking. Please.