Ethan Hawke is no fan of the Oscars. The actor let his true feelings about the Academy Awards be known in a new interview with Gotham magazine, calling the way movies compete “asinine.” 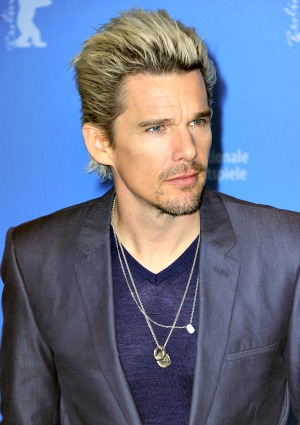 Ethan Hawke and Joaquin Phoenix are two outspoken, anti-Oscars actors. Four months after the Walk the Line actor crossed the line by publicly slamming the Academy Awards, the man seen here has echoed the same thoughts.

The New York Post reports Ethan Hawke told Gotham magazine, “People want to turn everything in this country into a competition… [so] it’s clear who the winner is and who the loser is.”

Despite having twice been nominated for an Oscar statue (Best Supporting Actor for Training Day in 2002 and Best Adapted Screenplay for Before Sunset in 2005) the Mark McGrath look-a-like, pictured here on Feb. 11, has never had the honor of winning.

Ethan Hawke continued of the show that’s going all-out to up its cool factor, “It’s why they like to announce the grosses of movies, because it’s a way of saying, ‘This one is No. 1.’ It’s so asinine… if you look at how many forgettable, stupid movies have won Oscars and how many mediocre performers have Oscars above their fireplace. Making a priority of chasing these fake carrots and money and dubious accolades, I think it’s really destructive.”

Carrots, you say? That specific word rings a bell.

Calling the awards “total, utter bulls**t” in Oct. 2012, Joaquin Phoenix vented, “I don’t want to be a part of it. I don’t believe in it. It’s a carrot, but it’s the worst-tasting carrot I’ve ever tasted in my whole life. I don’t want this carrot. It’s totally subjective. Pitting people against each other… It’s the stupidest thing in the whole world.”

Phoenix later backtracked a bit, however, explaining, “I wouldn’t have the career that I have if it weren’t for the Oscars. It’s not like I f**king hate the Oscars. It doesn’t occupy my time to where I can build up hate.”

What do you think of Ethan Hawke’s Oscars-bashing?