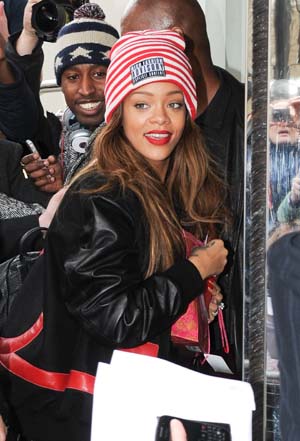 The best part about Law & Order: SVU doing a Rihanna-inspired story? You get to hear Mariska Hargitay say the kind of stuff you’d like to tell Rihanna.

“What he did to you is despicable,” Mariska Hargitay grits out in the promo released by the network, which previews an ep that the voiceover promises is “a familiar story of two celebrities intertwined by abuse.”

The promo also features prominent pictures of a Rihanna-lookalike on the cover of a tabloid, with a banged up face, and that same girl posing for paparazzi and yelling “I’m sorry!” to the Chris Brown doppelganger from the confines of a great big bed, wrapped in sheets.

Sure sounds like some celebrity known for publicly posting photos of herself in bed in various states of undress.

“Caleb has a hold on her,” Hargitay further opines. “Going against him feels impossible.”

All righty. Business Insider grabbed a brief shot from the promo that appears to show the abused female celebrity dead. “Get ready for the Law & Order twist,” promises the promo. Is this the twist? The Rihanna stand-in ends up murdered?

It sure sounds like Ice-T says, “He’s dead,” so maybe both the SVU World Rihanna and Chris wind up on the slab.

Regardless, should be an interesting one for gossip-watchers.

The Law & Order franchise has taken on celebrities before. Law & Order: Criminal Intent had a 2007 episode, Bombshell, that was something of the Anna Nicole Story, while Season 17 of Law & Order had the episode “Murder Book,” where an estranged ex-husband wrote an O.J. Simpson-like If I Did It book.

The Rihanna and Chris-ish episode, “Funny Valentine,” is due to air Wed. Feb. 27.

Since Rihanna DGAF about our opinions on her relationship, do you suppose she’ll watch?