Brandi Glanville had a few choice words for the publicist of her archenemy LeAnn Rimes — and one of those words starts with the letter F. 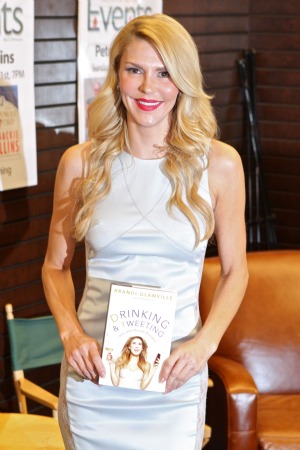 What’s good for the goose is not good for the gander, it seems: Brandi Glanville has spent years bashing LeAnn Rimes for breaking up her marriage to Eddie Cibrian, but when the singer’s publicist finally took a stand and threw mud right back at her, Glanville freaked out.

Responding to Glanville’s charges that Rimes is unstable and Cibrian is a deadbeat dad, the singer’s rep Marcel Pariseau struck back with a harsh statement.

“Brandi might consider getting some help with her drinking,” he said. “If you watch her show, read her book and follow her tweets, she is constantly referring to her drinking. Even the title of her book has the word drinking in it. In fact, she was arrested for a DUI. It is a fact that after a night of drinking in Vegas she married her ex-best friend’s ex-husband.

“In reality [Eddie Cibrian] has two films in the can and recurring on two television shows. [Brandi] makes it sound like they are scraping by but read her book where she devotes a whole page to what she does to her face; fillers, botox, skin treatments, etc. And just recently on Entertainment Tonight had botox done to her hands. All of that doesn’t come cheap. Eddie pays for all of the boys [sic] expenses like school, sports, clothing, etc.”

“Brandi is one of the most narcissistic people around. She never takes responsibility for anything. Basically everyone past and present is at fault but no fault lies with her,” he continued.

“Read the description of Narcissistic Personality Disorder and tell me what you think? I thought this ‘memoir’ was to help other women and to empower them? Do her actions and words resonate with the definition of a role model? I think not!”

Glanville was not amused by Pariseau’s accusations and his back on Twitter, “Here is my response 2 the statement my ex’s publicist put out about me this am “Go F** Urself” & u can quote me. #igotmorejobsthenjlobitch”