Megan Fox and Michael Bay have buried the hatchet after a long-running feud over comments she made to the press about the director. She is now slated to star in Bay’s reboot of Teenage Mutant Ninja Turtles. 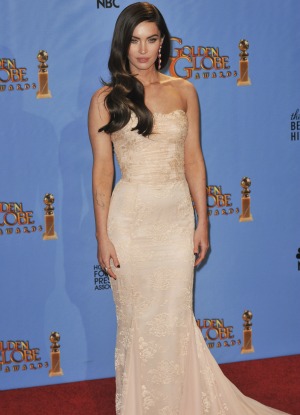 The feud is over. On Thursday, Hollywood director and producer Michael Bay announced the news on his website that he was reteaming with Megan Fox for the reboot of Teenage Mutant Ninja Turtles. The film is expected to be combination of live-action and animation.

Bay wrote, “TMNT: we are bringing Megan Fox back into the family!”

Back in 2009, after starring in Transformers: Revenge of the Fallen, Fox told Wonderland magazine some interesting things about her director.

She said, “He’s like Napoleon and he wants to create this insane, infamous mad-man reputation. He wants to be like Hitler on his sets, and he is. So he’s a nightmare to work for, but when you get him away from set, and he’s not in director mode, I kind of really enjoy his personality because he’s so awkward, so hopelessly awkward. He has no social skills at all. And it’s endearing to watch him.”

The 48-year-old director didn’t take too kindly to her words.

In a 2011 interview with GQ magazine, Bay said, “She was in a different world, on her BlackBerry. You gotta stay focused. And you know, the Hitler thing. Steven [Spielberg] said, ‘Fire her right now.'”

Bay continued, “I wasn’t hurt, because I know that’s just Megan. Megan loves to get a response. And she does it in kind of the wrong way. I’m sorry, Megan. I’m sorry I made you work twelve hours. I’m sorry that I’m making you show up on time. Movies are not always warm and fuzzy.”

Even Megan Fox isn’t satisfied with her body >>

Even her Transformers co-star, Shia LaBeouf, stuck up for Bay.

In the same interview, he said, “Criticism is one thing. Then there’s public name-calling, which turns into high school bashing. Which you can’t do. She started s***-talking our captain.”

Fox was replaced by Rosie Huntington-Whiteley for the third film in the Transformers series, but Bay told GQ the feud had subsided.

Megan Fox needs a nanny for her look-alike baby, Noah >>

He revealed, “She sent me a text three months ago. She said, ‘I hope you’re doing well.’ I responded, ‘Who is this?’ She goes, ‘Megan, you dork!’ I said, ‘Oh, well, thank you, hope you’re well.’ When you’re days and months on a set, it’s like a family. You say rude things and you make up.”

And make up they did. The new mom is scheduled to play April O’Neil, a reporter and a human pal of the Ninja Turtles. The film is in the casting stage, so filming will begin later this year.