The Mystic Falls Immortals deal with the consequences of their disastrous trip to find the cure. 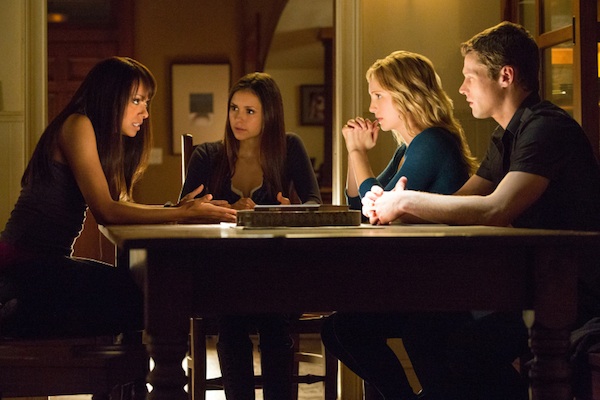 The question on all of our minds this week was: Is Jeremy (Steven R. McQueen) dead? Like, really dead? The answer is yes. He’s so dead it’s almost overkill.

Elena (fashionable Nina Dobrev), much like us, doesn’t believe it when she first discovers his body. Why would she? A place like Mystic Falls practically forces you to believe death is an just inconvenient episode that happens occasionally, kind of like catching a cold. Nobody really stays dead.

However, the rules are different for Jeremy. He wasn’t a vampire, but he was a supernatural, so the Gilbert ring couldn’t protect him and he really died. Elena uses her impressive vampire muscles to carry Jeremy’s body home and then refuses to bury him. Instead, she leaves him lying around the house waiting for him to wake up. She’s so immersed in denial that she can’t even smell his decomposing body.

Everyone tries in his or her own way to convince her and they all almost get their heads bitten off, literally. Elena has decided that Bonnie (Kat Graham) will be able to bring back Jeremy, but they have to find her first.

Bonnie is, unfortunately, with Shane who is completely brainwashing her. He tells her they are “the beginning.” Oh, the allure of elusive revolutionary titles. He tells her there needs to be another massacre, at least 12 more people have to die and then they can bring all their loved ones back from the dead. Fair trade, right? Not selfish at all. Bonnie returns to Mystic Falls, lays her crazy plan on the table, and Elena almost goes for it.

Klaus gets his own show on CW >>

Then homegirl just snaps. She arrives at that moment where the truth (and the smell) finally hit her. She realizes Jeremy is gone and there’s no coming back. She pours gasoline on his body and all over the house and lights a match. Damon (sexy Ian Somerhalder) and Stefan (married Paul Wesley) stop her from burning it all down, but then she breaks into the most heartbreaking cry.

To help stop the pain, Damon uses his sire bond to force her not to feel anything. After a few moments, she calms down. Of course, there is the issue that without feelings she has completely lost her humanity. She is a shell of the person she once was and exactly who she didn’t want to become. No big deal.

When Elena is left alone for half a second she lights the match again. The brothers come in trying to persuade her not to burn down the only home she’s ever known. What if she wanted to return to the memories one day? With a cold dead stare she says, “I won’t,” drops the match, and Jeremy and all of her childhood memories go up in flames.

Slow-motion walk out of the house and there you have it. Elena is now a legit vampire.