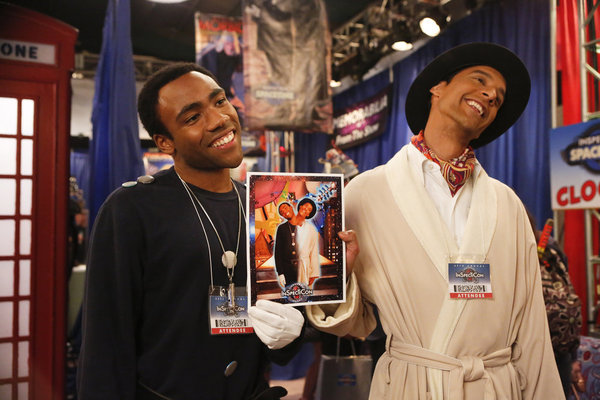 Although the study group has always been a childlike bunch, this season the gang seems to have reverted back to actually being children. In this episode, Troy (Donald Glover) gets jealous of Abed’s (Danny Pudi) new friendship, Annie (Scream 4’s Alison Brie) plays house with Jeff ( sexy Joel McHale), and Britta (Gillian Jacobs) says everything with a wide-eyed, confused look on her face. And then there’s Pierce (controversial Chevy Chase). Well, he’s just Pierce.

Jeff’s dad revealed! Find out who will play Papa Winger >>

It is that wonderful time of year again when the Inspector Spacetime convention (the popular British television show of course) rolls around. The whole group decides to go even though Abed is the only one who watches the show. While there, Abed runs into a friend who totally tries to push Troy out of the picture. You know the type — passive aggressively forgets your name, makes inside jokes and doesn’t acknowledge your presence. Britta said it best when she told Troy, “He’s trying to steal your boyfriend.”

Troy has a “crazy girl” moment when he lashes out in the middle of a seminar and Abed, being Abed, doesn’t really even respond. Eventually, Troy decides that maybe Britta can start filling Abed’s role and be, you know, his actual significant other. But that doesn’t last long. Britta will never fill the void that Abed would leave behind.

At the same time, Abed has a “Winger” moment and discovers that he needs his friends, especially Troy, to keep him grounded in reality (as much as Abed can be). Plus, his new friend is a liar. Troy and Abed reunite and end up bonded together forever in a souvenir photograph.

Meanwhile, Annie is hanging out in Jeff’s hotel room when room service assumes she is Mrs. Winger and she lets it go to her head. She allows all the staff to believe she’s Jeff’s wife. So, when the doorman discovers Jeff is in the lobby flirting with a beautiful woman, she keeps up the act to save face. She has a “jealous wife” moment, throws a drink on him and berates him for cheating. It doesn’t help that the crowd thinks he’s the villain from Inspector Spacetime and now everyone hates him.

Joel McHale’s past life as a college football player >>

After the dust settles, Jeff and Annie have a little chat about the act she put on. Turns out she does this often and maybe it’s because she’s not living a grownup life yet. Being an adult to her is ordering an appletini like they do in the movies. She’s still just a kid.

The best part of the episode is certainly the ending when Jeff gives in to being the villain lookalike and gives the fans what they want. He rushes on stage and busts open his shirt. Nice closing image.