Prince Harry has a new girlfriend: socialite and model Cressida Bonas. The pair were recently sighted on a romantic Swiss vacation. 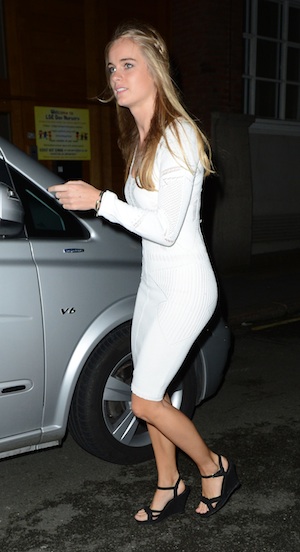 Prince Harry was spotted with his former flame in Switzerland earlier this weekend. While Prince Harry met Cressida last May, E! News reports the two split after pictures surfaced of Prince Harry naked in a Las Vegas hotel room with someone other than Cressida. Understandably, Bonas called off her relationship with Prince Harry.

However, Bonas seems to have forgiven Prince Harry because the two were extremely cuddly on the Swiss slopes. British newspaper The Sun reports a source spotted Bonas and Prince Harry exchanging affectionate touches and kisses on Wednesday.

“Cressida… climbed on to Harry’s knee,” said the source. “He started softly rubbing her hair, then they began kissing. It was quite passionate — much more than a peck on the lips.”

Be still our hearts: Prince Harry might be naked on video! >>

An Australian news site, News Limited, says Prince Harry and Cressida Bonas have run in the same social circle for years because of Bonas’ wealthy family. Cressida’s father is Jeffrey Bonas, and her mother is Lady Mary-Gaye Georgiana Lorna Curzon. Cressida attended elite boarding schools such as the Stowe School and later enrolled in Leeds University.

Prince Harry cheats during his trip to Jamaica >>

Cressida Bonas’ mother has married four men — and divorced each of them — and has five children. Cressida is the only daughter from her mother’s marriage to Jeffrey Bonas.

A source for E! News said the two make a great couple.

“They met through [Princess] Eugenie who is friends with Cressida,” said the source. “Cressida is really smart, very naturally pretty and just a really cool girl to hang out with. It’s hard for Harry to date as there as so many opportunities out there, but Cressida is someone he knows he can trust as she is already in his circle. She’s already passed the test of being discreet.”