Conjuring up memories of nights on the town during college may be a bit difficult, for the obvious reasons, but 21 and Over will certainly help you reminiscence about those bygone nights and possibly help you relive some outlandish experiences. SheKnows got the chance to chat with the stars of the movie to talk about making this hysterical film. 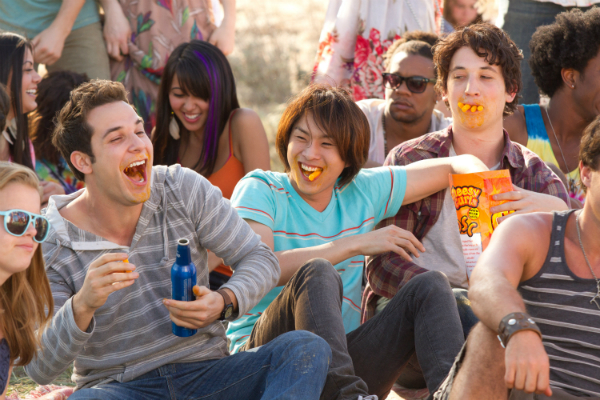 If you thought The Hangover was outrageous and gut-wrenchingly hysterical, be prepared to double over with laughter because 21 and Over was penned by the same writers.

Jeff Chang (played by Justin Chon), a med student preparing for a life-changing interview the day after his birthday, is surprisingly greeted by two of his oldest friends Miller and Casey (Miles Teller and Skylar Astin). The two are on a mission to make Jeff’s 21st birthday as memorable, or unmemorable (by drinking, of course!) as possible. Cue massive amounts of alcohol, mechanical bull-riding, drinking games, sorority sisters, breaking and entering and nudity.

Watch our interview with Justin Chon and Miles Teller

Almost every scene in the movie was scandalous yet at the same time hilarious, leaving many moviegoers wondering: How on earth did these actors muster up the courage to do such outrageous things together?

“When Miles and I first got to Seattle, we had our first costume fitting and they just held a sock and were like, who wants to go first? We could have done one of two things, it was like a fight or flight moment. We could make a big deal or we knew we had to do it at some point so I was like screw it, let’s go, and I dropped my pants and so did Miles and we were like, ‘Ice broken, lets shoot this movie!’ Now we can do anything,” Skylar divulged to SheKnows, laughing at the hilarity of the situation.

Well, that’s one way to break the ice.

Watch our interview with Skylar Astin and Sarah Wright

While a majority of the movie includes crude and sometimes indecent scenes, the underlying message of 21 and Over is actually relatively profound and heartfelt.

“[My character, Miller] values friendship more than anything else. He likes to give to other people, and that’s the most rewarding thing to him,” Miles told SheKnows.

The camaraderie between the characters both in the movie and in real life is clearly discernible, which only enhances the film and makes even the most ridiculous of scenes seem genuine, including one with a buffalo.

The years of going out to numerous bars in one night, getting in trouble with the police and winding up in jail or at the hospital are hopefully a thing of the past for you, but 21 and Over might just have you longing for a game of suck and blow or beer pong once again.