Anderson Cooper is the man of the hour. The journalist will receive one of GLAAD’s highest honors — the organization’s 2013 Vito Russo Award. 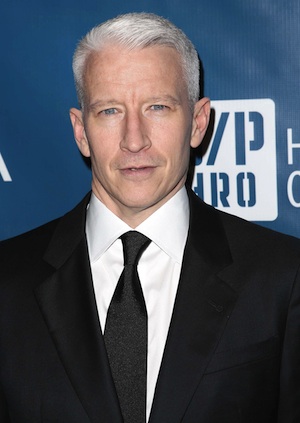 Anderson Cooper is the apple of GLAAD’s eye. The organization, whose name stands for Gay and Lesbian Alliance Against Defamation, plans to honor the journalist at this year’s GLAAD Media Awards.

According to The Huffington Post, Cooper’s set to receive the 2013 Vito Russo Award. It will be the first time the anchor has appeared at a public function related to the lesbian, gay, bisexual and transgender (LGBT) cause.

GLAAD president Herndon Graddick released a statement saying, “By sharing his own experiences as a gay man, Anderson has reminded millions of Americans that LGBT people are part of their everyday lives and an integral part of our cultural fabric. He continues to raise the bar and set a new standard for journalists everywhere, and I’m proud to call him a friend.”

Last summer, Cooper acknowledged his sexuality in an email to The Daily Beast‘s Andrew Sullivan.

He declared, “The fact is, I’m gay, always have been, always will be, and I couldn’t be any more happy, comfortable with myself, and proud.”

The multiple ceremonies will be held in New York on March 16 at the New York Marriott Marquis, in Los Angeles on April 20 at the JW Marriott and in San Francisco on May 11 at the Hilton San Francisco — Union Square.