Howard Stern jumped in to defend Kelly Clarkson after Clive Davis made certain allegations in his new memoir. The American Idol star says his account is filled with “misinformation.” 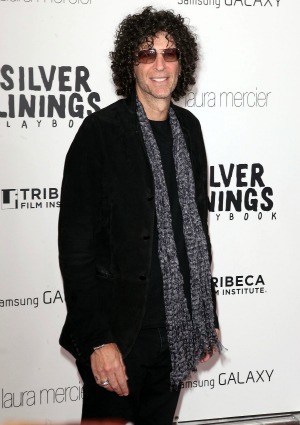 It looks like the he said, she said fight is going to continue a bit longer now that Howard Stern has jumped into the fray. On Wednesday, Stern decided to show his support for Kelly Clarkson in her battle against Clive Davis‘ comments in his new book.

The memoir, The Soundtrack of My Life, not only includes the music mogul’s admission that he is bisexual, but it includes his account of a crying incident in his office over the song “Since You’ve Been Gone.”

Davis believes he was the one who pushed for the hit song on her album, My December, while Clarkson maintains the sobbing was over another big song “Because of You” when Davis dismissed her as a “sh**ty writer.”

After Clarkson took to her WhoSay account to clear up the confusion, Davis spoke to the L.A. Times to defend her allegations.

Kelly Clarkson is totally chill about her upcoming wedding >>

He told the paper, “In the book, I provide an in-depth look at our years together during which we shared major multi-platinum success, as well as a few creative differences. I am truly very sorry that she has decided to take issue with what I know to be an accurate depiction of our time together.”

Now, to add more spice to the pot, comes shock-jock Stern who tore apart the 80-year-old executive. On his SiriusXM radio show, he said, “It sickens me when management guys like to set the record straight about how f**king creative they are and what geniuses they are.”

Of course, Stern wasn’t done; he continued with, “This guy is trying to diminish what she does? Doesn’t he have enough in life, can’t he tell his story without f**king degrading her?”

Well, it seems that Stern knows a bit from experience since creative types are always clashing with executives over personal projects and freedom of expression. It is Stern’s own freedom of speech that landed him the deal with SiriusXM satellite radio after years in terrestrial radio.

The America’s Got Talent judge even supports Clarkson’s talent as someone with an “amazing voice” who has “worked hard to get to where she is.”

Hopefully, this is the last word on the subject matter and Clarkson and Davis can go back to a peaceful and successful music partnership.