Laura Bush may have previously spoken out in favor of gay marriage, but apparently that doesn’t mean you can quote her on it! The former First Lady wants out of a new pro-gay marriage ad. 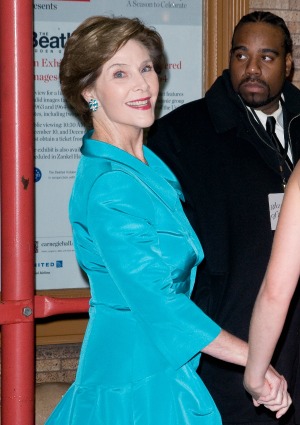 Laura Bush’s gay marriage quotes are causing a stir. Not because of their content, but because the former First Lady and Spoken from the Heart author did not give permission for what she said previously to be used in a new ad.

The Respect for Marriage Coalition caught soon-to-be-grandma Laura Bush off guard by using a quote from her that dates back to a 2010 conversation with Larry King, in which she said, “When couples are committed to each other and love each other then they ought to have the same sort of rights that everyone has.”

After word reached the 66-year-old that she’s appearing in a new pro-gay marriage advertisement, a spokesperson had this to say:

“Mrs. Bush did not approve of her inclusion in this advertisement nor is she associated in any way with the group that made the ad. When she became aware of the advertisement Tuesday night, we requested that the group remove her from it.”

So far, it does not appear the group has any plans to take the ad down, but rather plans to spend $1 million to air the spot nationally as well as run print ads in major newspapers.

“We used public comments for this ad from American leaders who have expressed support for civil marriage,” a statement from the Respect for Marriage Coalition reads. “We appreciate Mrs. Bush’s previous comments but are sorry she didn’t want to be included in an ad. The ad launched a public education campaign that will now move to new and different voices that reflect the depth and breadth of our support.”

Interestingly, the gay marriage ad also features a clip of former Secretary of State Colin Powell voicing his support for same-sex marriage rights. Yahoo News notes that a spokeswoman for Powell stated they were not asked for permission either, but that “his remarks are in the public domain and we have not asked them to remove it.”

Do you think the new ad had the right to use Laura Bush’s gay marriage support quote?